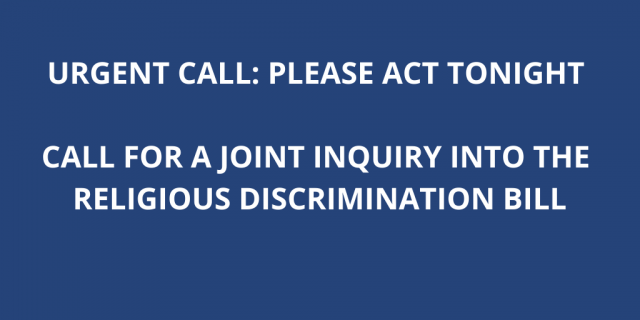 Parliament will be considering this Bill again tomorrow, so we must act NOW

We are reaching out to you with an urgent call to action. Please see below for details and our easy to send pro forma letter that you can send in less than 5 minutes!

Last week the federal Government introduced the third draft of the Religious Discrimination Bill.. ALHR believes that the latest iteration n of the Bill remains significantly inconsistent with international human rights law and creates an unprecedented and extreme anti-human rights situation where all Australians can potentially be harmed by permissible discrimination on the basis of religious faith.

Despite a Government commitment to a parliamentary inquiry, the Bill is still listed for debate in the House of Representatives next week. The timing of an inquiry over the Christmas and New Year period  means many people who are affected by the Bill or who want to comment on the Bill may not have a proper opportunity to participate and be heard.

ALHR has written to Members of Parliament to outline our very significant concerns with the Bill. On Friday we issued a detailed media release which sets out our concerns regarding the significant human rights implications of the Bill and its impact on existing anti-discrimination protections in Australia.

We now urge you to take 5 minutes to write to your local MP and/or the following key politicians. We have created a pro forma letter specifically for members of the legal and human rights community that you can use or adapt by copying and pasting it from below and sending to :

Your actions will make a difference!

As a member of the Australian legal community, I am writing to express my concerns about the third draft of the Religious Discrimination Bill and to urge you to ensure that the Bill is referred to a joint parliamentary inquiry, so that all MPs have the opportunity to contribute and hear from people directly affected by the laws.

I support the legal protection of the human right to thought, conscience and religion but the Religious Discrimination Bill does not acheive a safe, reasonable or proportionate balance with other human rights. It will build a fundamental inbalance into our existing anti-discrimination legislation by privileging religious-based discrimination above the rights of others to live free from discrimination.

If this Bill is passed, all Australians, including some of the most vulnerable people in our community such as racial minorities, LGBTIQ+ people, women, people with disability or chronic illness, single parents, people of minority faiths or of no faith will have less protection from harmful discrimination.

Religious freedom is not superior to other fundamental human rights and it does not mean freedom to visit harm upon others. Australian laws should not protect behaviour that is harmful and discriminatory, particularly where it is likely to most heavily impact already vulnerable groups.

I urge you to oppose the bill and ensure it is referred to a joint parliamentary inquiry with sufficient time to examine the very significant human rights impacts of the Bill and hear from the Australian community.