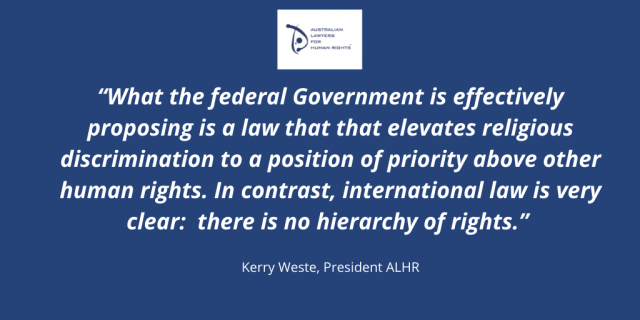 Australian Lawyers for Human Rights (ALHR) believes the third version of the Federal Government’s Religious Discrimination Bill remains inconsistent with international human rights law and creates an extreme anti-human rights situation where all Australians can potentially be harmed by permissible discrimination on the basis of religious faith.

ALHR President Kerry Weste said, “While ALHR welcomes the scaling back of the the so-called ‘Folau clause’ and provisions that would have allowed healthcare workers to refuse treatment to people on religious grounds, we  remain very concerned by the retention of provisions that will:

“What the federal Government is effectively proposing is a law that that elevates religious discrimination to a position of priority above other forms of discrimination and subjugates other fundamental human rights. In contrast, international human rights law is clear: there is no hierarchy of rights.”

“If this Bill is passed in its current form every Australian, whether at work, school, or accessing goods and services such as healthcare or public transport may be legally subjected to offensive, uninformed, insulting, demeaning or damaging ‘statements of belief’ as long as those statements are based on or in religion and made in ‘good faith.’ The “good faith” test established under the Bill is more extreme than in the previous exposure drafts and is entirely subjective. It  will render what are currently prohibited statements under existing anti-discrimination laws, legally protected. This will create a landscape in Australia where, for example, comments from a manager to a female employee that “women should not hold leadership positions” or comments from a doctor to a patient that “HIV is a punishment for sin” or comments to a student that ‘disability is the work of the devil” may be legally protected ‘statements of belief’.

Ms Weste stressed, “Where State anti-discrimination legislation aligns more closely with international human rights law than does the proposed Commonwealth legislation it is particularly objectionable for the Commonwealth legislation to override State human rights protections. This is unprecedented in Australian legal history. Moreover the Bill will override protections in the Commonwealth Racial Discrimination Act 1975.  This approach creates a situation where some of the most vulnerable people in our community including racial minorities, LGBTIQ+ people, women, people with disability or chronic illness, single parents, or people of minority faiths, will have less protection from harmful discrimination. Further, the Bill will create a barrier to access to justice for vulnerable people who will be forced into the costly Federal Court if they wish to pursue a complaint regarding “statements of belief”.

Faith-based hospitals, aged care facilities, accommodation providers and disability service providers will be able to discriminate in incredibly broad and unjustified ways against people with different or no religious beliefs in employment. For schools, charities and non-commercial bodies this protection will extend beyond employment to also permit discrimination in education and the delivery or certain services.”

“The Bill would significantly inhibit employers and bodies that confer professional qualifications in sectors such as law or medicine, from responding reasonably to members who make offensive, uninformed, insulting, demeaning or damaging statements based in religion outside of work contexts.”

Of particular concern are unprecedented provisions that will allow corporations to sue if they suffer detriment because of a close association with a person who holds a religious belief and that extend liability under the Bill to anyone who is directly or indirectly ‘knowingly concerned’ in religious discrimination.

ALHR supports a Religious Discrimination Act which provides protections against religious discrimination in areas of public life including employment, education, membership of sporting clubs and other areas of public life. However, Ms Weste says the Bill “fails to adhere to well established international legal principles regarding the indivisibility, interdependence and proportionality of all human rights.”

“The rights contained in Article 18 of International Covenant of Civil and Political Rights which establish the right to freedom of thought, conscience and religion, are not superior to other human rights. The ‘right to believe’ is an absolute personal right exercised internally, but there is no absolute right to manifest or act upon one’s religious belief externally so as to impact upon others.”

“Religious freedom does not mean freedom to visit harm upon others in the name of one’s own religion.”

“Neither our Government nor our laws should cherry pick only select human rights for protection. This does not reflect Australia’s international legal obligations to protect all human rights equally and fails to take account of the necessary interrelation between all human rights.”

“Australia is the only Western liberal democracy without a federal Human Rights Act or Bill of Rights. As a nation we have agreed to be legally bound by the core international human rights conventions yet our citizens and residents continue to live without the human rights protections enjoyed by people in comparable countries across the Western world.”

“The human right to freedom of religion would best be protected by a Federal Human Rights Act.”

ALHR has also made extensive submissions in relation to the first and second exposure drafts of this Bill, as well as submitting to the 2018 Expert Panel on Religious Freedom as to whether Australian law (Commonwealth, State and Territory laws) adequately protects the human right to freedom of religion and the 2019 Senate Legal and Constitutional Affairs References Committee inquiry into the desirability (or otherwise) of legislative exemptions that allow faith-based educational institutions to discriminate against students, teachers and staff. You can find those submissions here