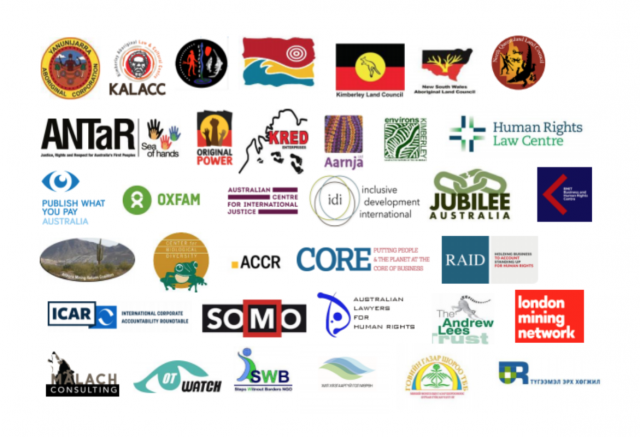 ALHR has continued to voice concern about Rio Tinto’s destruction of the Juukan Gorge rockshelters, a place of significant cultural and spiritual importance to the Puutu Kunti Kurrama and Pinikura people. Archaeological evidence suggests the sites dated back 46,000 years, making it one of the oldest known areas for human occupation within the Australian deserts.  Our 11 June 2020 media release regarding the urgent need for legislative reform is available here

Today, 35 Aboriginal and Torres Strait Islander and human rights organisations, including ALHR, have called on the global Corporate Human Rights Benchmark (CHRB), based in the Netherlands, to strip Rio Tinto of its status as a global human rights leader, following the company’s blasting of a 46,000 year old Aboriginal sacred site in the Pilbara region, Western Australia.

The destruction of the caves at Juukan Gorge in May devastated the Traditional Owners, the Puutu Kunti Kurrama and Pinikura (PKKP) people, and Aboriginal and Torres Strait Islander communities around Australia, leaving many in disbelief.

Despite global condemnation from the public, media and the company’s own investors, Rio Tinto is still currently listed on the CHRB’s website as the highest ranked extractives company globally on human rights issues, with a score in the second-highest possible band.

Nolan Hunter, CEO of the Kimberley Land Council, said that, “Rio Tinto’s actions at Juukan Gorge show a total lack of regard for their obligations to the PKKP people and their human rights obligations as an international company operating in Australia. The PKKP had already engaged in a seven-year battle to try to protect the site. For Rio Tinto to claim the blast was a “misunderstanding” is highly insulting to the Traditional Owners, and to all Aboriginal people who have fought so hard for rights over their land.”

Wayne Bergmann, another Kimberley Aboriginal leader and CEO of Aboriginal charitable trust KRED, commented: “Rio Tinto has quite literally blown up its social licence to operate as far as Aboriginal communities are concerned. People who invest in Rio Tinto need to reconsider if Rio Tinto is worthy of continued investment. We are calling on the Benchmark to ensure that the company’s human rights ranking reflects the reality for people here on the ground. Rio Tinto needs to prove itself as worthy of such standing.”

James Christian PSM, CEO of the NSW Aboriginal Land Council, commented: “Across Australia, Aboriginal communities are coming together to say enough is enough. For far too long, heritage protection regimes across the Country have simply sanctioned cultural destruction. These regimes of ruin, presided over by Governments of all persuasions, simply allow mining companies like Rio Tinto to trample on our rights and heritage with complete impunity. It is time for our Governments, our companies, our whole society to value and protect our culture and heritage.”

The organisations are calling on the CHRB to suspend Rio Tinto to help ensure the company and relevant executives are held to account for their actions.

Keren Adams, Legal Director at the Human Rights Law Centre, which helped to coordinate the letter, said that Rio Tinto’s actions at Juukan Gorge were not an aberration, but rather symptomatic of a broader culture of disregard for communities’ rights and cultural heritage:

“Unfortunately Juukan Gorge is not an isolated incident. In the past few years, Rio Tinto has been the subject of serious human rights complaints by communities impacted by its operations in a number of different countries. We have been working with communities in Bougainville, for instance, who are also facing destruction of their sacred sites as well as serious pollution of their land and water sources as a result of the massive quantities of mine waste left by Rio there. Rio Tinto must properly acknowledge and address its impacts on communities if it is to have any hope of resurrecting its reputation as a human rights leader.”

Ms Adams said that Rio Tinto’s high ranking under the benchmark also demonstrated a clear need for a re-think of how serious human rights violations are treated by the benchmark.

“Companies use benchmarks like the CHRB to demonstrate their human rights credentials to investors, governments and the public. If these ranking systems can’t be relied upon to provide credible, accurate information, they can become part of the problem, perpetuating the illusion that everything is fine within a company’s culture when it is anything but.”

About the Corporate Human Rights Benchmark

The CHRB assesses 200 of the world’s largest publicly-traded companies annually against a set of 100 indicators based on the United Nations Guiding Principles on Business and Human Rights. In 2019, the CHRB suspended Brazilian mining company Vale from the benchmark following the devastating dam collapse at the company’s Córrego do Feijão mine in Brumadinho, Brazil.

Read the joint letter to the Corporate Human Rights Benchmark