Religious Discrimination Bill fundamentally flawed and must be rejected 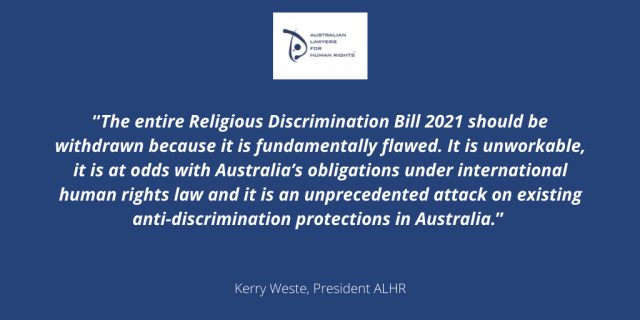 Following today’s release of two key inquiry reports into the Morrison Government’s divisive Religious Discrimination Bill 2021, Australia’s leading association of human rights lawyers has said the entire Bill should be withdrawn because it is unworkable, at odds with Australia’s obligations under international human rights law and an unprecedented attack on existing anti-discrimination protections in Australia.

ALHR President Kerry Weste said, “Rather than increasing protection against discrimination in Australia, the Religious Discrimination Bill seeks to create an anti-human rights situation whereby all Australians can potentially be harmed by permissible discrimination on the basis of religious faith.”

“If this Bill is passed in its current form every Australian, whether at work, school, or accessing goods and services such as healthcare or public transport may be legally subjected to offensive, uninformed, insulting, demeaning or damaging ‘statements of belief’ as long as those statements are based on or in religion and made in ‘good faith.’ The ‘good faith’ test established under the Bill is more extreme than in previous exposure drafts and is entirely subjective. It  will render what are currently prohibited statements under existing anti-discrimination laws, legally protected.”

“The kind of minor amendments being touted by the Prime Minister, which he claims will protect LGBTI students, will not remedy the basic fact that this Bill will still allow discrimination against such children under the guise of religious views.”

ALHR supports a Religious Discrimination Act which provides protections against religious discrimination in areas of public life including employment, education, membership of sporting clubs and other areas of public life. However, Ms Weste says the Bill “fails to adhere to well-established international legal principles regarding the indivisibility, interdependence and proportionality of all human rights.”

“The rights contained in Article 18 of International Covenant of Civil and Political Rights, which establish the right to freedom of thought, conscience and religion, are not superior to other human rights. The ‘right to believe’ is an absolute personal right exercised internally, but there is no absolute right to manifest or act upon one’s religious belief externally so as to impact upon others.”

“Religious freedom does not mean freedom to visit harm upon others in the name of one’s own religion.”

“Neither our Government nor our laws should cherry pick only select human rights for protection. This does not reflect Australia’s international legal obligations to protect all human rights equally and fails to take account of the necessary interrelation between all human rights.”

“Australia is the only Western liberal democracy without a federal Human Rights Act or Bill of Rights. As a nation we have agreed to be legally bound by the core international human rights conventions yet our citizens and residents continue to live without the human rights protections enjoyed by people in comparable countries across the world.”

“The human right to freedom of religion would best be protected by a Federal Human Rights Act.”

“The Religious Discrimination Bill should be rejected. “said Ms Weste.

ALHR’s submissions on the Religious Discrimination Bill 2021, and all previous exposure drafts of the Bill can be accessed here