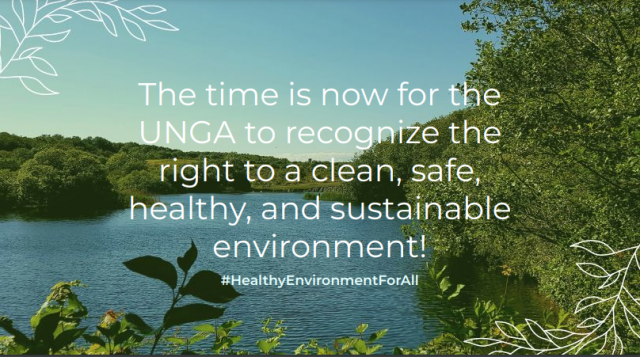 Ahead of the closing of the 76th UN General Assembly session, Australian Lawyers for Human Rights (ALHR), together with an alliance of over 1300 civil society and Indigenous people organisations from around the globe, are calling on UN Member States to affirm the right to a healthy environment.

Following advocacy by the governments of Costa Rica, Maldives, Morocco, Slovenia, and Switzerland, also known as the “Core Group”, and an international alliance of civil society and legal experts, in October last year the United Nations Human Rights Council (UNHRC) adopted a historic resolution recognising a standalone human right to a clean, healthy, and sustainable environment and appointed a new Special Rapporteur on Human Rights and Climate Change. ALHR says that now needs to be followed by action within the UN General Assembly.

ALHR President Kerry Weste said, “In order to strengthen accountability among governments to implement the right to a clean, healthy and sustainable environment it is critical for the UNHRC’s October resolution to be reaffirmed in the General Assembly of the United Nations.”

“Although the Australian Government has not yet recognised the right to a healthy environment, 156 out of 193 UN member states have already given this right legal recognition in either constitutions, legislation or regional treaties. General Assembly recognition of the right to a healthy environment would build on this and trigger acceleration for environmental action that safeguards human rights. It would be a significant step in ensuring a global commitment that those most vulnerable to the impacts of climate change and environmental degradation will not be left behind.”

“A safe, clean, healthy and sustainable environment is integral to the full enjoyment of almost every human right that Australia has agreed to uphold under the core UN Human Rights Treaties. It is clear that there is now very significant international momentum for the recognition of a standalone right to a healthy environment at the UN General Assembly.

Importantly, such a move would facilitate a more robust commitment to environmental protection, climate adaptation and mitigation measures in Australia. ALHR calls on Australia to support UN General Assembly recognition of the right to a healthy environment. It is time both major political parties recognise the reality that a healthy environment is a prerequisite for the enjoyment of all Australian’s fundamental human rights.”

20220413 ALHR Media Release UNGA to Recognise the Right to a clean, healthy and sustainable environment.docx