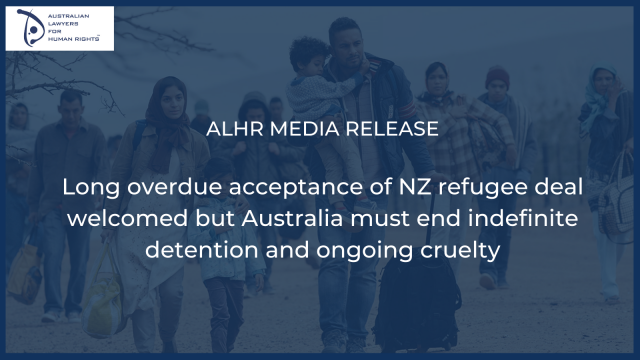 Australian Lawyers for Human Rights (ALHR) welcomes news that the Morrison Government has accepted the New Zealand offer to permanently resettle 450 refugees over a three-year period. The move will prioritise refugees currently detained offshore in Nauru, but will also extend eligibility to refugees detained indefinitely onshore in immigration facilities or in community detention.

ALHR Refugee Rights Co-Chair Caitlin Caldwell said, “While the acceptance of the offer will be a welcome reprieve for 450 refugees who have remained in limbo, subject to inhumane and degrading conditions, for close to a decade, we must not forget that punitive Australian Government policies continue to subject children, women and men to ongoing unfathomable trauma in the form of indefinite detention. The United Nations has found this treatment amounts to torture and voilates Australia’s international legal obligations to people who seek asylum.”

“The NZ offer was first placed on the table nine years ago. Those who will now thankfully be able to begin a new life in New Zealand could have been spared nine years of immeasurable and entirely unnecessary suffering. This suffering has always been completely avoidable and the Morrison Government should not be praised for flagrantly disregarding Australia’s human rights obligations for so long.”

Caldwell continued, “So many Australians have experienced a level of isolation and hardship being separated from their friends and family over the last two years.  It is incomprehensible that this isolation and hardship continues indefinitely, year after year, and without justification, for so many refugees who have simply sought Australia’s protection pursuant to the Refugee Convention.”

“ALHR acknowledges many refugees remain without a pathway to permanent resettlement, and without hope, and we call on the Morrison Government to immediately end offshore processing and offer durable protection solutions to all refugees who have sought safety in Australia.”