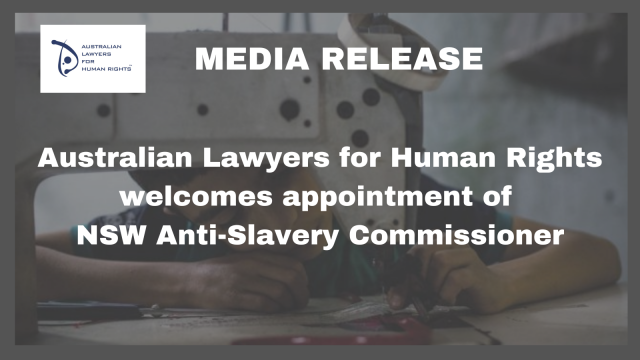 Australian Lawyers for Human Rights (ALHR) welcomes the appointment of the NSW Anti-Slavery Commissioner, Dr James Cockayne, effective from 1 August 2022. The role centres on the implementation of and compliance with the Modern Slavery Act 2018 (the Act) and its amendments pursuant to the Modern Slavery Amendment Act 2021. Dr Cockayne follows in the footsteps of Professor Jennifer Burn, who was appointed as the Interim NSW Anti-Slavery Commissioner in late 2018.

ALHR Business and Human Rights Co-Chair Dr Natalia Szablewska said, “This a long-awaited development makes NSW the second jurisdiction, after the United Kingdom (UK), to establish a statutory office of Anti-Slavery Commissioner. It took until 1 January of this year for the NSW legislation to finally come into force, following a period of hiatus, including the revision of the Act which resulted in, among other things, the removal of penalties in NSW for modern slavery offences; a disappointing outcome.”

In March, a statutory review of the Commonwealth Act was announced. The issue paper for public consultation is yet to be developed but is anticipated to be released later this year. ALHR Business and Human Rights Co-Chair Lara Douvartzidis said, “ALHR looks forward to participating in this process and submitting responses as it has done for all major developments on modern slavery laws in Australia to date.”

Ms Douvartzidi further added, “There is much to be learnt from experiences in other jurisdictions. For example, in July this year, the UK Supreme Court ruled that diplomatic immunity did not extend to allegations of modern slavery offences, such as domestic servitude, because it amounts to commercial activity practised for personal profit. These kinds of judgements recognise the systemic nature of the exploitation of migrant domestic workers by foreign diplomats and may serve as a catalyst for strategic litigation in other jurisdictions, including here in Australia.”

The current review of the Commonwealth Act is an opportunity to ensure that federal modern slavery laws are fit for purpose. ALHR continues to call for improvements to the current framework including  the establishment of a federal Anti-Slavery Commissioner to support and encourage good practice and the introduction of penalties for entities that fail to comply with the Act’s provisions.