It’s time for Australia to become a more modern, fair and responsive democracy 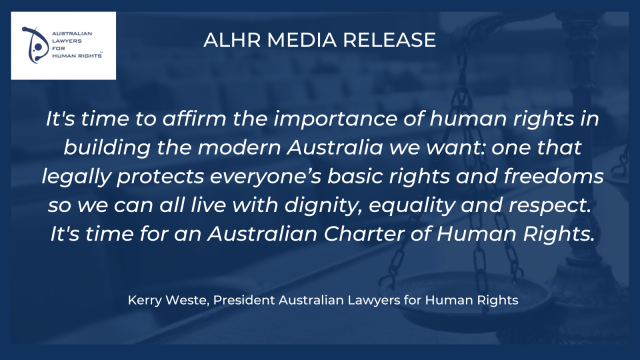 Australian Lawyers for Human Rights (ALHR) calls on the Albanese government to reopen dialogue about legislating an Australian Charter of Human Rights.

ALHR President Kerry Weste says, “We are the only Western democracy on the planet without some form of Federal Charter of Human Rights. We now have a new federal government promising to lead Australia away from harmful and divisive political debates and to rebuild our status as a progressive, modern democracy. This brings with it a once in a decade opportunity to affirm the importance of human rights in building the modern Australia we want: one that legally protects everyone’s basic rights and freedoms to ensure we can all live with dignity, equality and respect.

Australia was a founding member of the United Nations and one of eight countries involved in drafting the 1948 Universal Declaration of Human Rights. However, despite this historic role on the international stage, we have failed to follow through at home.

Successive Australian governments have cherry picked only a limited number of our international obligations for protection in federal legislation. This selective and piecemeal approach leaves the people of Australia without any legal recognition of many of their most fundamental human rights. Unfortunately, it is an approach that also works to perpetuate divisive and harmful discourse because we have failed to establish a national framework that reflects the core principle that everyone’s human rights are equally worthy of protection, and that enables human rights to be proportionately balanced.

Moreover, even the few rights that have been selected to receive federal legal recognition are under threat.  Over the last decade, ALHR has spoken openly of our alarm at moves towards increasingly disproportionate government measures and an erosion of Australia’s democratic institutions that endangers the limited human rights protections we do have.

We already have Human Rights Acts in the ACT, Victoria and Queensland. These are consistently and demonstrably improving the lives of individuals. A Federal Charter of Human Rights would similarly protect the human rights of all Australians equally in a comprehensive national framework. This would assist in the recognition and promotion of every person’s human rights in all areas where federal government actions touch on their lives. The citizens of every other comparable democratic nation enjoy such protections and Australians deserve nothing less. It’s time for an Australian Charter of Human Rights,” Ms Weste said.