Organ Transplants and Crimes Against Humanity In China: An Australian Issue 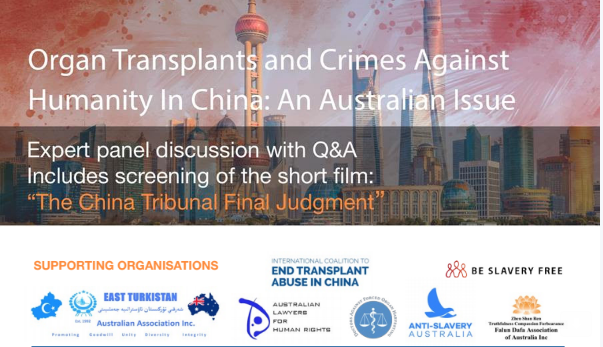 Please join ALHR at an expert panel discussion with Q&A: ‘Organ Transplants and Crimes Against Humanity In China: An Australian Issue’

The evening will include a screening of the short film, “The China Tribunal Final Judgement”

A shortage of organ donors worldwide is undeniable and travelling overseas for a transplant is on the rise. The medical and legal implications of sourcing organs overseas are significant, and often result in breaches of fundamental human rights. For at least two decades, the government of China has been accused of forcibly harvesting organs from prisoners of conscience, principally Falun Gong practitioners and Uyghur Muslims – killing the victim in the process. In June 2019 the China Tribunal, an independent people’s tribunal chaired by Sir Geoffrey Nice QC, concluded that forced organ harvesting in China has been committed for years on a significant scale and continues today. The Tribunal also found, beyond reasonable doubt, that China has committed crimes against humanity against Falun Gong and the Uyghurs.

In China a prolific organ transplant trade is flourishing, leading unquestionably to what can be called one of humanity’s greatest tragedies. For Australians and businesses, this raises serious issues of human rights and concerns for complicity in crimes against humanity. Join a panel of experts who will discuss the business and human rights implications of forced organ harvesting in China, modern slavery obligations for Australian businesses, the United Nations’ human rights treaties and mechanisms, and Australia’s responsibility to protect and promote human rights.

Join a panel of experts who will discuss the business and human rights implications of forced organ harvesting in China, modern slavery obligations for Australian businesses, the United Nations’ human rights treaties and mechanisms, and Australia’s responsibility to protect and promote human rights

Omir Bekali is a Uyghur from Kazakhstan who was arrested in March 2017 whilst visiting his parents in Pichan, Xinjiang Uyghur Autonomous Region. An operator in a tourism company at the time, he was accused of terrorist activity and detained without trial until January 2018. Omir testified to the China Tribunal that he was tortured, and forced to have blood tests and organ examinations whilst in detention. He now speaks internationally to bring attention to the Uyghur crisis in China.

Martijn Boersma is a lecturer in the Management Department at the University of Technology Sydney Business School. He is interested in the intersection of business and society and has extensively published on these topics. He co-authored the book Addressing Modern Slavery (2019).

2003 – 2018: Commissioner of the International Commission of Jurists

Currently she is a member of the Women’s Advisory Committee of the NSW Corrective Services Commission, and a board member of Sisterhood is Global.

Prof. Maria Fiatarone Singh, MD, FRACP is a geriatrician who holds the John Sutton Chair of Exercise and Sport Science in the Faculty of Health Science, and Professor, Sydney Medical School at the University of Sydney. Her research, clinical, and teaching career has focused on the integration of medicine, exercise physiology, and nutrition as a means to improve health status and quality of life across the lifespan, with a focus on frail elders. She has published extensively in her field and also researched and presented on the issue of forced organ harvesting in China since 2008. She has been on the Medical Advisory Board of the NGO, Doctors Against Forced Organ Harvesting since 2008, and is a member of the Australian Committee of the International Coalition To End Transplant Abuse in China.

Susie Hughes is executive director and co-founder of the International Coalition To End Transplant Abuse In China (ETAC) She has extensive experience in the not for profit human rights sector focusing on the issue of forced organ harvesting from prisoners of conscience in China. Susie was a member of the ETAC Steering Committee responsible for initiating the China Tribunal and contributed pro bono as director of logistics for the China Tribunal. She has hosted numerous roundtable discussions, Q&A forums and online seminars on forced organ harvesting in China.

Co-Director of Be Slavery Free (formerly Stop The Traffik) Be Slavery Free is a coalition of civil society groups which seeks to prevent, disrupt and abolish modern slavery in all its forms. Together they inform consumers, advocate to government and request businesses to make changes for slavery-free supply chains.

Jintao Liu is a practitioner of the Buddha School practice of Falun Gong. He began practicing at a time when Falun Gong was promoted by the Chinese Government for its health benefits, and people could practice freely in the parks and public spaces. In 2006 whilst completing a Masters degree in Chemical Technology, police arrested him and without a trial Jintao was detained for 2 years in a forced labour/re-education facility during which time he was tortured to force him to renounce his faith in Falun Gong. Jintao testified to the China Tribunal that he also received forced blood tests and organ examinations whilst in detention. Jintao now advocates to help others in the Falun Gong community who are still severely persecuted in China.

Dr David Matas is an international human rights lawyer, author and researcher. He has served the government of Canada in numerous positions including as member of the Canadian delegation to the United Nations Conference on an International Criminal Court; the Task Force for International Cooperation on Holocaust Education, Remembrance and Research; and the Organisation on Security and Cooperation in Europe Conferences on Antisemitism and Intolerance. He has received numerous awards and honours, including the Manitoba Bar Association Distinguished Service Award in 2008 and the Order of Canada in 2009. He co-authored the first investigation into forced organ harvesting in China in 2006 and An Update report in 2016.

Prof. Wendy Rogers is a Professor of Clinical Ethics and Deputy Director of the Macquarie University Research Centre for Agency, Values and Ethics. She has a long-standing interest in the ethics of organ donation and transplantation and has made major contributions to the National Health and Medical Research Council’s ethical guidelines for organ and tissue donation and national guidance on donation after circulatory death. Wendy’s work is widely published in international journals and she was recently named Australia’s Research Field Leader for bioethics.

Over 160 media articles on the China Tribunal judgment and UN statement https://press.chinatribunal.com/press/