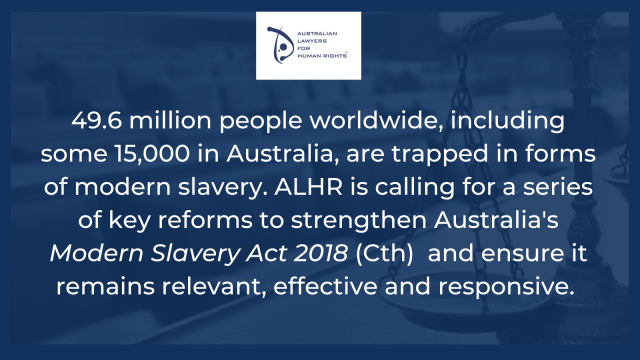 ALHR has made a submission to the statutory review of the Modern Slavery Act 2018 (Cth). We are calling on the Federal Government to implement our recommendations for reforms to urgently strengthen the legislation and more effectively hold companies accountable for identifying and preventing modern slavery in their operations and supply chains.

According to the most recent estimates, 49.6 million people worldwide, including some 15,000 in Australia, are trapped in forms of modern slavery, with 86% of those in forced labour being exploited in the private sector. This makes modern slavery more prevalent today than ever in human history. It is vital that the MSA reflects the current issues facing individuals, the community, businesses and the nation as a whole regarding modern slavery in order for the Act to be relevant, effective and responsive to the national, regional and global developments in this space.

ALHR’s submission makes recommendations for amendment to the Modern Slavery Act 2018 (Cth) (The Act), including but not limited to:

Leading human rights lawyers say the need for Australia to act to bridge remaining gaps between business and respect for people and the planet is more pressing than ever. Calls for reform to ensure Australia elevates human rights, in the context of business behaviour and wider environmental concerns, have been renewed following the recent 11th United Nations Forum on Business and Human Rights. This year, the forum focused on “rights holders at the centre: strengthening accountability to advance business respect for people and the planet in the next decade.”

In Australia, the Federal Government is undertaking a statutory review of the Modern Slavery Act 2018 (Cth) (the Act) following its first three years of operation. Designed to address modern slavery risks in the domestic and international activities of entities based, or operating, in Australia, with an annual consolidated revenue of more than $100 million, the Act is under consideration by business, civil society and government alike, in order to assess its operation and compliance. An Australian Lawyers for Human Rights (ALHR) submission submitted in this review makes 14 discrete recommendations to strengthen Australia’s domestic response to modern slavery.

ALHR’s Senior Co-Chair of Business and Human Rights, Dr Natalia Szablewska, said, “According to the most recent estimates, 49.6 million people worldwide, including some 15,000 in Australia, are trapped in forms of modern slavery. This makes modern slavery more prevalent today than ever in human history. It is vital that Australia’s Modern Slavery Act reflects the current issues facing individuals, businesses and the country as a whole, in order for the Act to be relevant, effective and responsive to national, regional and global developments in this space.”

Dr Szablewska explained, “ALHR is calling for the introduction of penalties and sanctions for non-compliance under the Act and the urgent establishment of an independent regulator, as well as a compensation fund for people subjected to exploitation through the operations and supply chains of Australian companies.” Research shows that current compliance with the Act may only be superficial and a ‘race to the middle’. Australia needs more obligations-focused and outcomes-oriented approaches, such as mandatory human rights due diligence.”

ALHR’s Youth Co-Chair of Business and Human Rights, Millie Jones, added, “Complex supply chains make modern slavery an inherently global issue. Australia must look to best practice in other jurisdictions, increase information sharing across borders and seek to harmonise its approach on the issue with that of other nations.

“ALHR calls upon the Australian Government to consider the very real human cost of modern slavery in its recommendations for reform and to urgently strengthen the Act in order to more effectively hold companies accountable for identifying and preventing modern slavery in their operations and supply chains.”