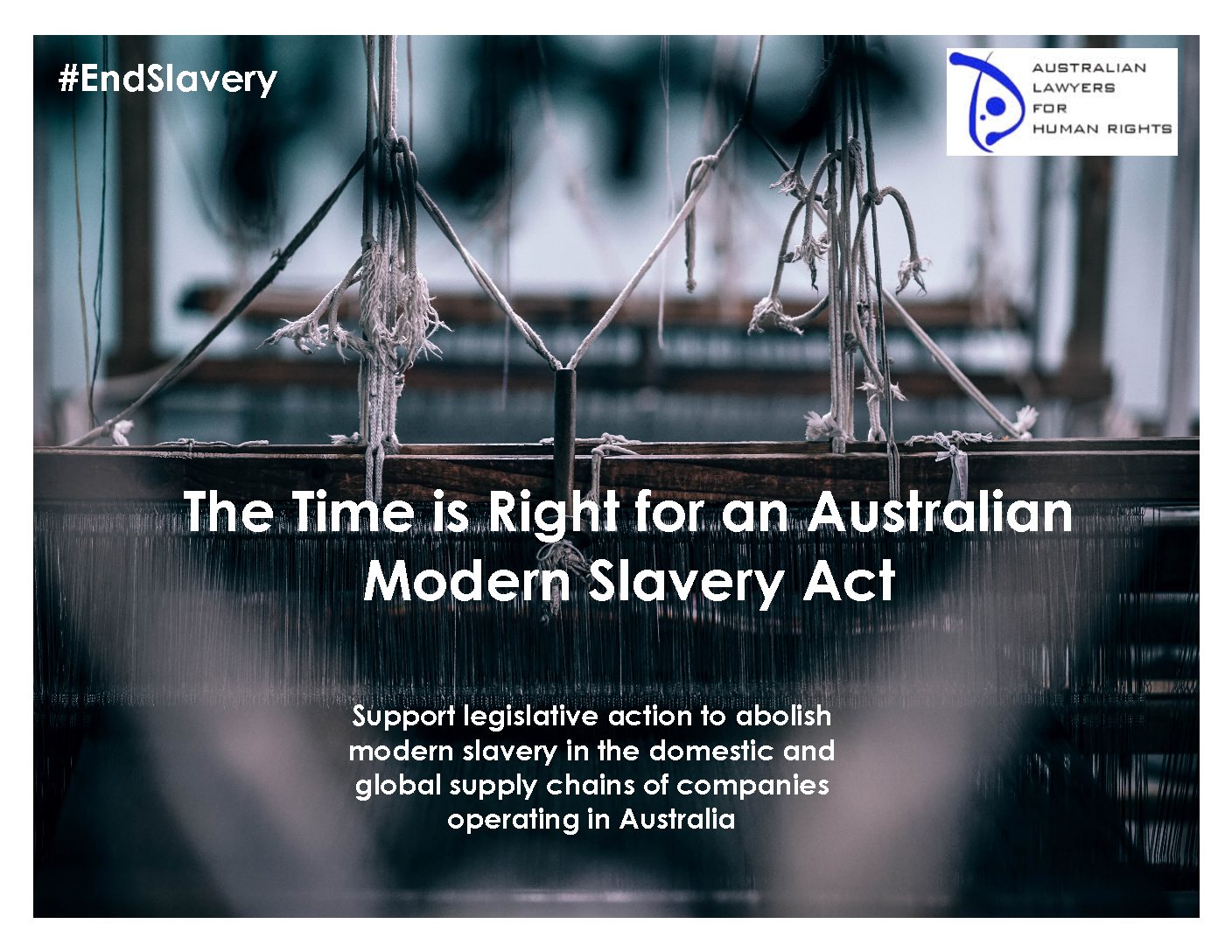 ALHR continues to advocate for the enactment of a Modern Slavery Act in Australia with a view to abolishing modern slavery in all its forms in the domestic and global supply chains of companies operating in Australia.

In February 2017 the Australian Government announced an Inquiry into establishing a Modern Slavery Act in Australia. In May 2017, ALHR made a detailed Submission to the Government’s Inquiry. ALHR’s submission advocated for the implementation of an Act, similar to the United Kingdom’s Modern Slavery Act 2015.

On 17 August 2017 the Foreign Affairs and Aid Sub-Committee of the Parliament’s Joint Standing Committee on Foreign Affairs, Defence and Trade tabled its interim report for the Inquiry, Modern Slavery and Global Supply Chains. The Interim Report summarises the evidence heard so far on the issue of global supply chain reporting. Public hearings have been held in the ACT and Victoria, and the transcripts can be viewed here.

ALHR has welcomed the Government’s release of a Consultation Paper proposing that large Australian businesses be required to report annually and publically on the steps they are taking to prevent modern slavery throughout their supply chains. The Government’s proposal is similar to the public reporting requirements on large companies in the United Kingdom’s Modern Slavery Act 2015 (s 54). The reporting mechanism proposed by the Government, reflects some, but not all, of ALHR’s recommendations to the Inquiry, which incorporated learnings from the UK experience and other jurisdictions, such as California, that have introduced similar legislation.

The Foreign Affairs and Aid Sub-Committee’s Interim Report appears promising in terms of its in-principle support for not just a public reporting requirement for large companies, but also for the establishment of an Anti-Slavery Commissioner. However, there is a concern amongst civil society groups that the Government’s response to the issue of modern slavery may be limited to these two initiatives, rather than the multi-faceted response required to combat modern slavery. In particular, in ALHR’s view, effective modern slavery legislation should be informed by, and consolidate, a range of Australian criminal, employment, discrimination, and migration law and policy.

ALHR’s Business & Human Rights (BHR) Subcommittee is currently coordinating ALHR’s response to the Consultation Paper due 20 October 2017. ALHR’s submission will respond to the 14 consultation questions posed by the Consultation Paper around the details of the nature of the public reporting mechanism and whether an independent oversight mechanism is required. ALHR’s submission will press the Government to ensure its modern slavery legislation is an effective and holistic response to this complex issue that affects, conservatively, at least 21 million people worldwide.

The BHR Subcommittee is still looking for volunteers to help with preparing this important piece of advocacy. If you would like to be involved, please email bhr@alhr.org.au. Please note that in order to participate in our work ALHR requires volunteers to be current members of ALHR. You can become a member or renew your membership here