Human rights lawyers call out Tasmanian Senator for her “Save Women’s Sports” Bill, exposing legal deficiencies in proposed laws endorsed by the Prime Minister as “terrific” 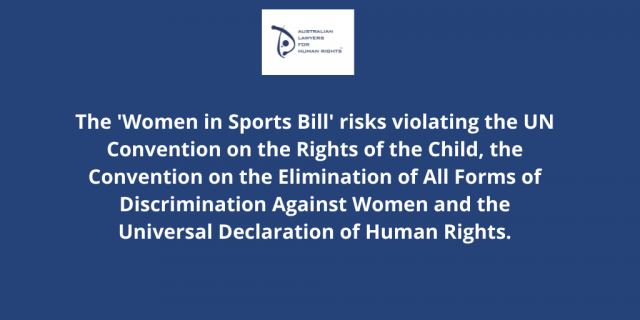 ALHR LGBTI Co-Chair, Georgia Burke, said, “The Bill is unnecessary because section 42(1) of the Sex Discrimination Act 1984 already allows people to be excluded from competing in sport, based on their sex, gender identity or intersex status, where the strength, stamina or physique of competitors is relevant.

ALHR LGBT Co-Chair, Nicholas Stewart, continued, “The Bill is against the spirit of sport. It is  cruel and divisive. The Bill proposes to repeal section 42 to allow discrimination against children under the age of 12, for the first time. It means that a trans woman, who transitioned before puberty and has the physical characteristics of a cis woman, can be legally discriminated against by a sporting club and excluded irrespective of any connection between her trans identity and sporting ability. Trans and gender diverse and intersex young people are among the most vulnerable groups in terms of violence, discrimination and mental health outcomes. If anything, the Australian Parliament should be considering laws that promote their physical and mental safety through protection from discrimination. Mr Stewart added, “Senator Chandler is legally qualified, but the Bill is legally deficient. Linking sex discrimination protections to biological attributes is inconsistent with science, medical practise and even the international professional standards that govern competitive sporting participation. The legislation could have unintended legal consequences for women born with chromosomal variations or other intersex characteristics. ALHR stands with Intersex Human Rights Australia, who rightly identify the Bill as profoundly regressive, including because it denies the biological realities that people with intersex variations live with, exacerbates social exclusion of persons with variations of intersex characteristics, and furthers incomprehension of the intersex community.”

ALHR President Kerry Weste said, “ALHR is concerned that the Bill is inconsistent with international human rights law standards. Its application to children under the age of 12 may violate Australia’s obligations to act in the best interests of the child and protect children’s rights to non-discrimination, health and development under the UN Convention on the Rights of the Child. We also consider the Bill inconsistent with the Convention on the Elimination of All Forms of Discrimination Against Women (“CEDAW”) and the Universal Declaration of Human Rights (UDHR).”

“In justifying that her Bill is compatible with human rights, Senator Chandler cites Article 10(g) of CEDAW” which requires States to take all appropriate measures to eliminate discrimination against women in order to ensure them equal rights with men in the field of education, including to ensure, “The same opportunities to participate actively in sports and physical education.” “CEDAW,“ Ms Weste notes, “does not exclude trans women.”

Protections afforded to transgender people in Australia were introduced in the 2013 amendment to the Sex Discrimination Act 1984 (Cth). Ms Weste explained, “These protections accord with Australia’s obligations as a signatory to the UDHR, pursuant to which all people, irrespective of sex, sexual orientation, gender identity or intersex status, are entitled to enjoy the protections including the right to be free from discrimination.”

“Tellingly, when quoting Article 10 in the Bill’s Explanatory Memorandum, Senator Chandler omits the words “in the field of education”, falsely giving Article 10 the appearance of having broader application. For Senator Chandler to cherry pick provisions of the CEDAW while ignoring other key international human rights principles is misleading. At best, this shows a concerning misunderstanding of the indivisibility of human rights. At worst, it is a deliberate misappropriation of a human rights instrument in pursuit of an unnecessary and harmful reform agenda which is contrary to Australia’s international obligations.

ALHR urges all members of parliament and the Senate to reject this Bill in its entirety. We call on Prime Minister Morrison to retract his description of a Bill that legalises discrimination against vulnerable children as “terrific.”