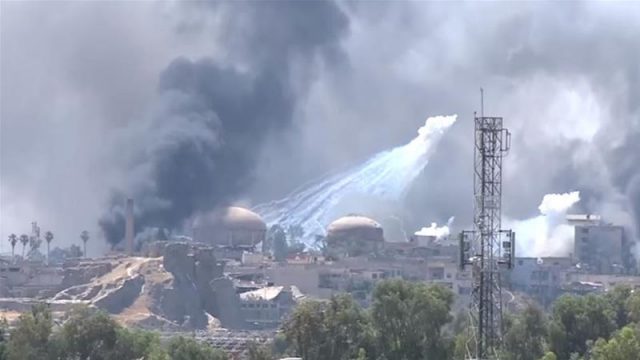 Photo Credit: As published by ALJAZEERA: screen grab from footage shot by Kurdistan24 shows what looks to be the use of white phosphorus in Iraq (YouTube)

Australian Lawyers for Human Rights (ALHR) has raised serious concerns about the use of White Phosphorus in Mosul, Iraq by the Combined Joint Force operating against ISIS, of which the Australian Defence Force (ADF) is a member.

ALHR’s spokesperson, said, “We are extremely concerned that a coalition which includes Australian troops is openly employing White Phosphorus in heavily built up civilian areas – a questionable military tactic that had not yet been used in the war against ISIS and was last seen deployed by the Israeli Defence Force during their incursion into Gaza in 2009.”

“White Phosphorus weapons have an incendiary effect and their use within high concentration civilian areas is prohibited under the Geneva Conventions. White Phosphorus burns fiercely when it is exposed to air, generating extreme heat and instantly producing clouds of dense white smoke.”

“Australia’s involvement in the use of White Phosphorus in urban civilian areas raises very serious international humanitarian law issues. The ghastly effects of White Phosphorus on human skin and flesh are well documented. Even relatively minor burns caused by this agent can often prove fatal. Its use should be scrutinised and investigated in all situations. Human Rights Watch and Amnesty International have condemned the Coalition’s use of White Phosphorus in West Mosul because it poses an incredible risk to civilian populations. The International Committee of the Red Cross, the authoritative voice on IHL, has said in the past that, if munitions containing White Phosphorous are used as a “smoke screen” rather than as weapons, their use is regulated under IHL. The legality of each incident of use has to be considered in light of all of the fundamental rules of IHL. Its legality will depend on a variety of factors – not all of which are known in this situation.”

“ALHR is troubled by the lack of transparency in Australia’s involvement in the use of White Phosphorus in Iraq. We must be able to scrutinise the use of such a dangerous chemical by the ADF and ultimately decide if we as a nation want to be part of a coalition of international forces that employs tactics posing such a high threat of horrific injuries to civilians.”

ALHR was established in 1993 and is a national association of over 2600 Australian solicitors, barristers, academics, judicial officers and law students who practise and promote international human rights law in Australia. ALHR has active and engaged National, State and Territory committees and a secretariat at La Trobe University Law School in Melbourne. Through advocacy, media engagement, education, networking, research and training, ALHR promotes, practices and protects universally accepted standards of human rights throughout Australia and overseas.