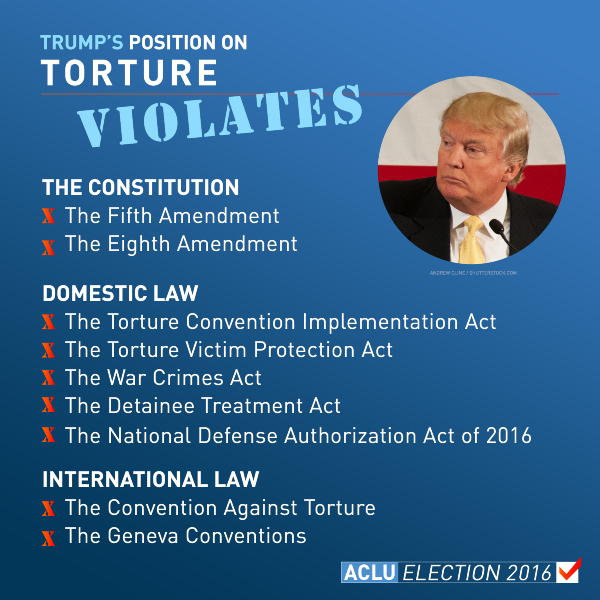 Australian Lawyers for Human Rights (ALHR) has slammed President Trump’s erroneous and eerie assertion that torture “absolutely…works”. In his first television interview since inauguration, President Trump suggested that Americans should engage in medieval torture because Isis was doing it and “we have to fight fire with fire”.

ALHR takes this opportunity to remind President Trump that it is well established in international law that freedom from torture is an absolute human right, without exception. The international community of nations has agreed that the prohibition of torture and cruel, inhuman or degrading treatment or punishment is a fundamental principle of international law from which no derogation is permitted. President Trump should have the foresight that his words may inspire systemic human rights abuses beyond America’s borders.

ALHR President Benedict Coyne stated: “In making such dangerous statements, President Trump sounds like a torture totin’ totalitarian which is bound to encourage other brutal dictators around the world to rule with cruelty. It is completely unacceptable that ‘the leader of the free world’ could hold such misguided and erroneous beliefs. The statistics, studies and non-alternative facts show that torture does not work, full stop. It would be prudent for the leader of the world’s greatest superpower to learn some basic principles of international law and then lead with wisdom, not ignorance.”

“Many international human rights instruments, such as the International Bill of Rights, which both the US and Australia have signed and ratified, provide that some human rights can be derogated from by restrictions provided at law and which are necessary to protect national security, public order, public health or morals or the rights and freedoms of others. Freedom of speech for example is restricted in order to protect the rights and freedoms of others. The prohibition on torture is not restricted, it is absolute.”

Former CIA boss Leon Panetta has come out today criticising President Trump for stating that torture works. Panetta said that “taking a backward step” and “going back to torture” and reopening CIA black-sites around the world not only violates the US Constitution but would be “damaging” to America’s national security.

ALHR calls on Foreign Minister Julie Bishop in her bid for Australia’s election to the UN Human Rights Council to strongly condemn these comments and beliefs of the new American President as they have no place in a decent, dignified, civilised and democratic world.

“Even straying out of the realms of legal principle, we find that there is no compelling evidence that torture actually works. In fact, even the American Senate Report released in December 2014 after a 4-year $40million investigation, concluded that CIA torture and ‘enhanced interrogation’ techniques did not work and produced either faulty intelligence or no intelligence at all. It appears that once again President Trump is playing fast and loose with the ‘alternative truth.” said Mr Coyne.

A four year $40m investigation Report by the United States Senate released in December 2014 concluded that: