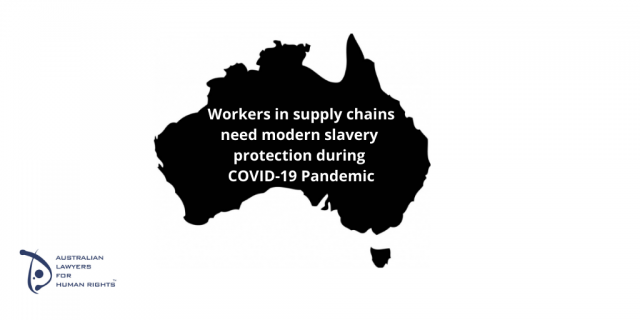 The COVID-19 pandemic is having globally unprecedented impacts as nations battle the health and economic implications of the virus. The International Labour Organization estimates that around 25 million jobs might be lost worldwide, pushing people into unemployment or under-employment. This increases the vulnerability of workers to exploitation.

Australian Lawyers for Human Rights (ALHR) welcomes the Australian Government’s initiative to establish a National COVID-19 Coordination Commission (Commission) to lead the private and public sector coordination in addressing the economic and social impact of the current crisis. The Committee is led by Mr Neville Power, the former head of the Fortescue Metals Group, and promises to comprise representatives of the private and non-for-profit sectors.

There are an estimated 450 million workers in global supply chains, and unknown numbers in domestic supply chains. The current crisis puts many of them at high risk of job losses, reduced income and, at the same time, will expose many others to potentially exploitative practices due to a demand surge. ALHR calls on the Government to ensure that the human rights of those in the supply chains in Australia, and internationally, are not compromised to meet the increased demand for certain products or services.

Dr Natalia Szablewska, Co-Chair of ALHR’s Business and Human Rights Committee said, “despite the pandemic having an impact on Australia’s economy, the surge to maintain revenue might hit hardest those employed in sectors that have historically had a higher risk of slavery and other forms of exploitation, such as agriculture, fishing and garment manufacturing.”

Dr Szablewska said, “the list of industries prone to worker exploitation and human rights violations could expand even further in response to the current crisis, and following its aftermath. Tourism and hospitality sectors might be particularly vulnerable. Increasing poverty and working poverty, especially among self-employed and casual workers, will undoubtedly push many to undertake jobs that are unsafe or lack basic protections, including in relation to the conditions of that work, which will facilitate labour exploitation and abuse.”

“In times of economic uncertainty, the most vulnerable are often disproportionately affected, which dictates a coordinated and decisive response by the Government and the private sector.”

It is more important today, than ever, that the Australian Government leads the global fight against modern slavery, by urging businesses in Australia to comply with the Modern Slavery Act 2018. Businesses need to continue to undertake their due diligence in their workplace practices, as well as across their supply chains, including when acting in response to the pandemic efforts.