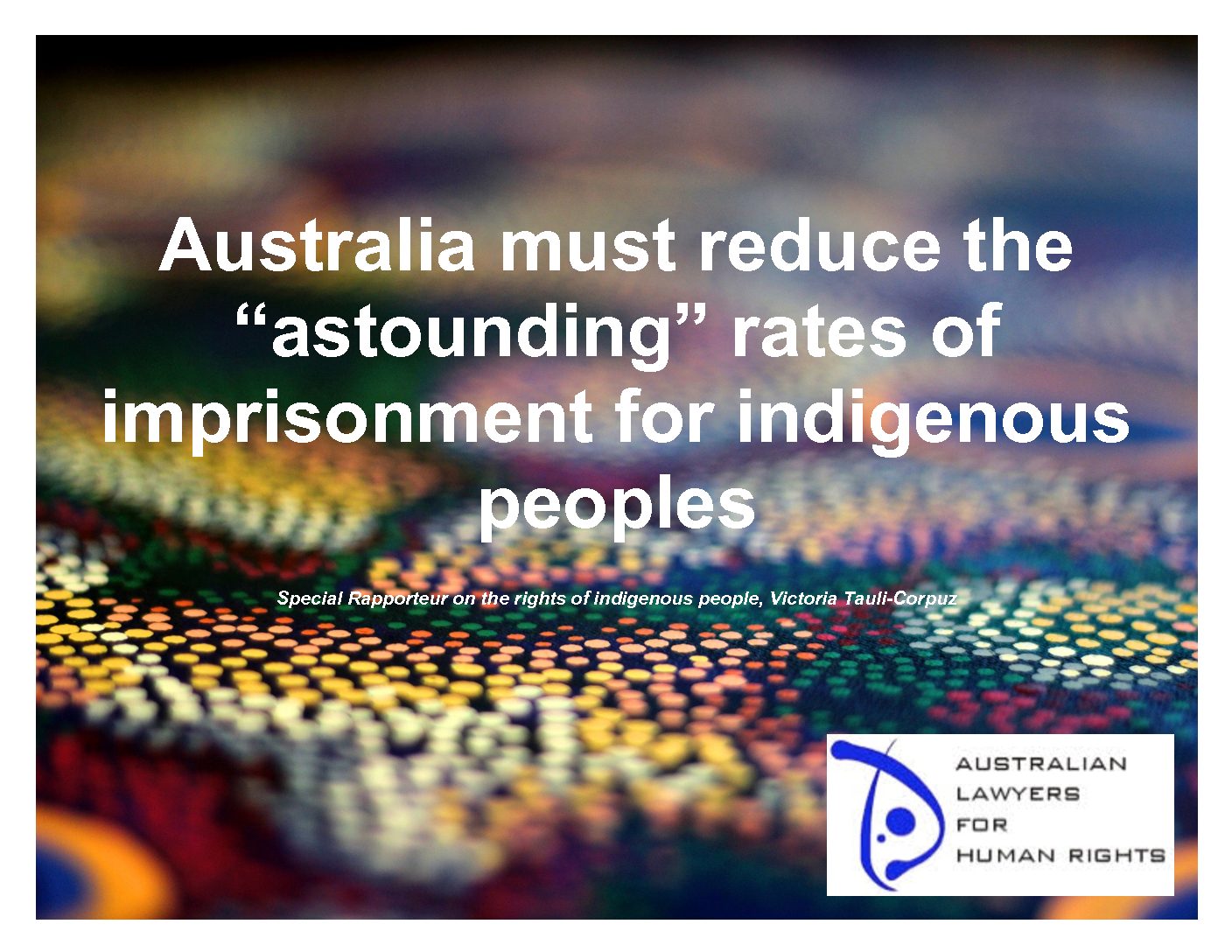 ALHR has made a submission to the Australian Law Reform Commission (ALRC) Inquiry into the incarceration rate of Aboriginal and Torres Strait Islander peoples.

On 17th July the ALRC released a Discussion Paper, Incarceration Rates of Aboriginal and Torres Strait Islander Peoples (DP 84), and issued a call for comments and feedback on its questions and  law reform proposals.

In our submission ALHR calls on the Commission to recommend that all Australian jurisdictions take guidance from the United Nations Human Rights Council Resolution 24/12. This resolution addresses human rights in the administration of justice, including juvenile justice, and makes a number of recommendations directly to governments. Of particular note in the context of the incarceration rates among Aboriginal and Torres Strait Islander populations are the Human Rights Council’s recommendations that governments:

Further, as noted in the Discussion Paper, Australia has endorsed the Declaration on the Rights of Indigenous Peoples. ALHR submits that a more nuanced understanding of the significance of this action could helpfully inform the Commission’s recommendations. As the Commission states, the Declaration is not a binding treaty under international law. However, depicting the Declaration as merely aspirational “undermines the capacity of the Australian government to engage in authentic and consultative decision-making with Aboriginal and Torres Strait Islander rights holders”. Such a characterisation also weakens efforts to ensure government accountability to standards voluntarily agreed to on the international plane.

ALHR submits that the Commission could helpfully interpret the Declaration as an authoritative interpretation of human rights obligations Australia already bears under international law, in relation to the interactions between Aboriginal and Torres Strait Islander peoples and the criminal justice system. Such an approach has been endorsed by the Parliamentary Joint Committee on Human Rights, which expects the Commonwealth parliament to draw on the Declaration as an influential source of guidance for policy-making and legislative drafting.[3]

ALHR calls on the Commission to recognise that Aboriginal and Torres Strait Islander women are over-policed as perpetrators and under-policed as victims of crime. Aboriginal and Torres Strait Islander women represent the fastest growing prison population in Australia, yet 70 to 90 per cent of this population has experienced family violence. These women are at the epicentre of the national family violence crisis and are currently 34 times more likely to be hospitalised as a result of family violence than non-Indigenous women and 10 times more likely to be killed as a result of violent assault.Further, a disproportionate number of Indigenous women in custody are suffering from mental illness, disability, the effects of trauma, homelessness and poverty. Imprisonment may be, in many cases, an inappropriate response to the circumstances experienced by these women. This is particularly the case since 80 per cent of these women are mothers, so their incarceration is also punishing their children and communities. Many women in prison do not pose a risk to the public and could safely serve their sentences in the community with suitable support.

Our full submission is attached here.