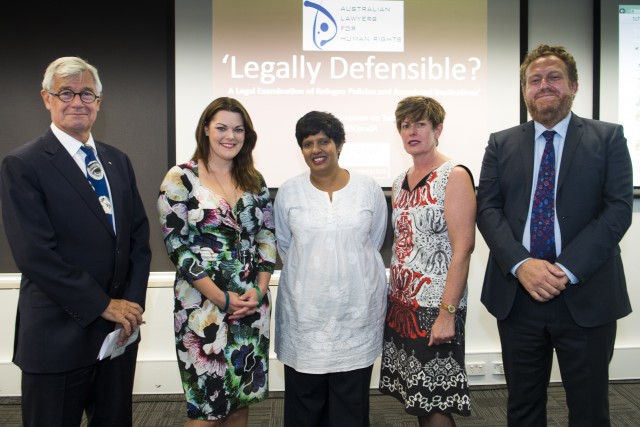 On 18 February 2016, students, academics and members of the legal profession came to La Trobe Law School’s city campus to listen to and ask questions of a panel put together by Australian Lawyers for Human Rights (ALHR). With the aim of analysing the legality of Australia’s refugee policies, the panel was made up of Anna Burke MP, Senator Sarah Hanson-Young, Julian Burnside AO QC, David Manne  and Dr Savitri Taylor.  The event was moderated by the Head of La Trobe Law School, Patrick Keyzer and sponsored by the La Trobe Law School.

This distinguished panel of speakers answered questions from the audience and each other.  In doing so they took the audience deep into the political issues and moral dilemmas that dominate Australia’s refugee policy landscape.

Dr. Taylor gave a stirring introduction.  Drawing on her expertise as a Professor of Refugee Law, she gave a sombre recount of the last 25 years of refugee policy in Australia.  In answering the question ‘how we got here’, Dr Taylor explained that the current policies were introduced “bit by bit” and 25 years ago they would have been inconceivable to both parties.  She concluded that it would take a collective effort to halt the race to the bottom when it comes to upholding human rights in Australia.

Ms Burke and Sen. Hanson-Young each explained their parties’ stance on refugees. Ms Burke said that Labor would reinstate the 1951 Refugee Convention if elected to power, to which Mr Manne retorted that it is one thing to sign up to international conventions and another to implement them. With Labor and Liberal committed to offshore processing, Mr Manne questioned whether any of the parties’ policies were capable of meeting Australia’s international obligations to refugees.  Ms Burke, who is approaching retirement from politics, defended her personal record on asylum seeker policy, saying that it was much better to abstain from votes and remain in the caucus to continue the fight, as opposed to crossing the floor of parliament and being thrown out of the Labor party.

Mr Burnside defended the Greens claiming they are the only party that really believes in the content of international human rights treaties. Mr. Burnside went further, claiming that Australia as a country has yet to believe in human rights. This starts with leadership, which arguably, has been absent from the Government in recent years. When the United Nations expressed concern over Australia’s refugee policies in 2015, then PM Tony Abbott announced that Australians were “sick and tired of being lectured to by the UN”.

In light of recent events, particularly the #LetThemStay campaign, the discussion was then directed by the audience to focus on two themes: children in detention and racism. Sen. Hanson-Young explained that while the Migration Act 1958 (Cth) requires that we detain children arriving by boat as a last resort, in reality we do it automatically. She added that if the Australian public could see what went on in detention they would be disgusted.

The discussion on racism in refugee policies was lead by Mr Burnside, Mr Manne and Sen. Sarah Hanson-Young.  The rhetorical question posed was ‘if it were white farmers from Zimbabwe coming to Australia by boat, would we be turning them away?’

Ms Burke put this down to a demonization of ‘the other’ to allow a rhetoric of ‘it’s us or them’ – paving the way for “political football of human lives”.

In keeping with the legal theme of the night, there was also an engaging discussion on the disparity between ‘the law’ as it stands, and the rule of law, Dr Taylor gave a nuanced insight into the differences between the two, with Mr Burnside lamenting the lack of a bill of rights in Australia which could lead to, as an extreme example, a policy in which all blue-eyed boys could be murdered by the Government at birth. This illustrated the point that there is no mechanism in Australia to ensure that laws are just or must adhere to the rule of law.

It was clear from the Panel’s responses that Australia has stacked the odds heavily against refugees.  Australia has created a chaotic system to apply for asylum and has stripped not only legal rights but also access to legal services.  Taking away legal rights is a deliberate strategy to silence the voices of refugees.  Collectively the Panel concluded by calling on the audience to give a voice to refugees and part of that is to engage with others who do not support refugees coming to Australia. The loudest of those voices should be the collective voice of Australian Lawyers.

In case you missed the discussion, our Storify feed will catch you up on all the highlights. It includes photos, tweets, and memorable quotes.  The Storify Feed can be found here.

This post was written by Hector Sharp, Victorian ALHR Co-Convenor and jointly published by ALHR and the La Trobe Law School Law and Justice Blog.