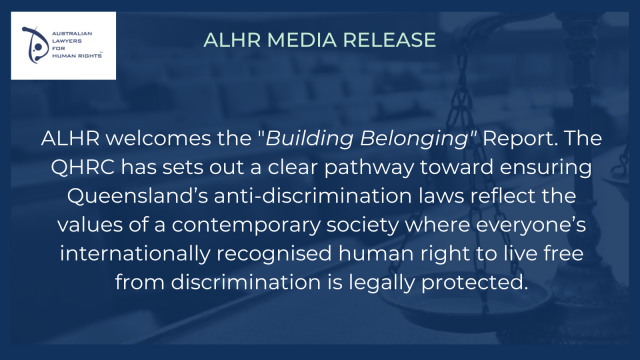 The ‘Building belonging: Review of Queensland’s Anti-Discrimination Act 1991 Report’ proposes a series of significant reforms to increase the scope and effectiveness of the state’s anti-discrimination protections.

Australian Lawyers for Human Rights (ALHR) is calling on the Palaszczuk Government to accept and swiftly implement all 46 recommendations.

ALHR President Kerry Weste said, “The Report sets out a clear pathway toward ensuring Queensland’s anti-discrimination laws are fit for purpose and reflect the values of a contemporary society where everyone’s internationally recognised human right to live free from discrimination is legally protected.”

ALHR Vice President and Co-Chair of LGBTIQA+ Rights, Nicholas Stewart said, “If implemented, these recommendations will also bring about an important change in the law’s attitude to exemptions claimed by, for example, religious schools.”

“There has been a history of ‘don’t ask, don’t tell’ systemic discrimination by religious schools, including Citipointe Christian School, which was widely criticised early this year for demanding parents sign an enrolment contract that students identify with their birth sex and denounce homosexuality. A shift to a proactive duty will remove legal loopholes that currently allow religious schools to discriminate against LGBTQ+ staff and students.”

“The recommended changes would strenghten protections against discrimination based on sexual orientation and gender identity and assist in safeguarding LGBTIQA+ Queenslanders rights to freedom of expression, freedom from homophobic and transphobic violence, torture and cruel, inhuman and degrading treatment.”

Ms Burke continued, “The Report also recommends important changes to the definition of ‘gender identity’ and ‘sexual orientation’ that would make anti-discrimination protections more inclusive and accurate, and create a new protected attribute of ‘sex characteristics’. This would  introduce much needed safeguards for people with variations of sex characteristics. These measures will fill significant gaps in the scope of protection available to the people of Queensland.”

Mr Stewart concluded, “This landmark report recommends much needed and extensive changes to Queensland’s anti-discrimination laws which would extend  protections to more people and introduce a positive duty to prevent discrimination. If implemented, these measures will contribute to a changing culture of respect for the wellbeing of all people in Queensland.”

“ALHR urges the Queensland Government to accept all of the QHRC’s recommendations and calls for bipartisan support of legislative measures to implement them,” Ms Burke said.