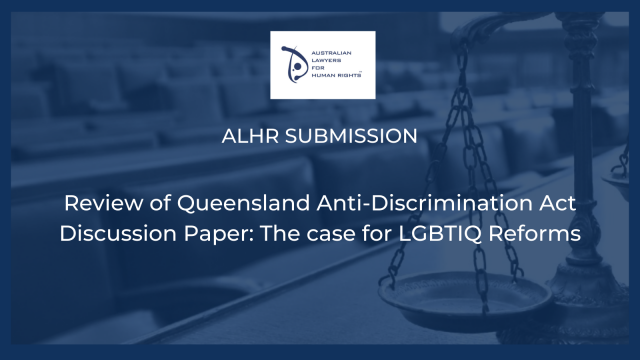 ALHR made a submission in response to the Queensland Human Rights Commission’s November 2021 Discussion Paper Review of Queensland’s Anti-Discrimination Act.

Our submission expands on ALHR’s earlier submission to the recent Queensland Parliamentary Inquiry into Serious Vilification and Hate Crimes. Prepared by our LGBTI Rights Committee, the focus of this work is primarily on issues relevant to lesbian, gay, bisexual, transgender, intersex and queer (LGBTIQ) people and communities, both as an area of ALHR expertise, and also because we believe the LGBTIQ protections offered under the Anti-Discrimination Act 1991 (Qld) (the Act) are in need of significant reform.

In particular, we will address questions which relate to the following terms of reference from the scope of the Review:

Read a copy of our submission in full here

We make the following recommendations