A free, unhindered, uncensored press is a cornerstone of democracy. 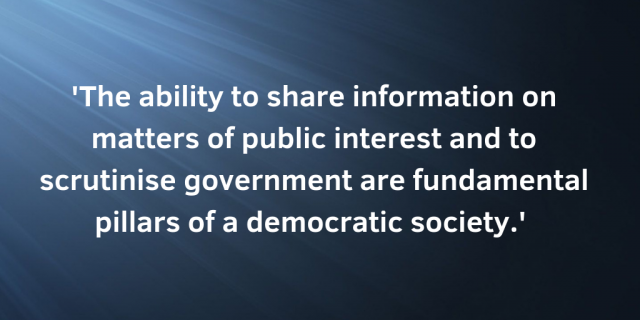 Australian Lawyers for Human Rights (ALHR) President Kerry Weste said, “The AFP raids on Annika Smethurst and, most recently, the ABC are alarming. Both Annika Smethurst’s story, published one year ago, and the ABC’s investigations of 2 years ago are clearly matters of public interest and both Australian Federal Police raids raise serious concerns regarding future media freedom in Australia.”

“Australia has very clear international legal obligations to protect and respect the right to freedom of expression. The United Nations Human Rights Committee has made it clear that a free, uncensored and unhindered press is essential in any society to ensure freedom of opinion and expression and the enjoyment of other universal human rights. The ability to share information on matters of public interest and to scrutinise government is a fundamental pillar of a democratic society. This can only happen if journalists can access information that is in the public interest and at the same time keep their sources safe and confidential.”

“The fact that the investigations of Annika’s home, computer and phone and of the ABC offices occurred so long after the relevant publications must raise questions about the purpose of the raids.”

“Australia had a significant role in drafting the Universal Declaration of Human Rights. This is a proud history that Australia has in upholding basic human rights and we should be vigilant to guard against their infringement by the government  of the day. Indeed, Australia campaigned for its seat on the United Nations Human Rights Council on the basis that it is an ‘international human rights leader’ with ‘respect for democracy and the rule of law.’ Yet we remain the only Western liberal democracy without any federal Human Rights Act to protect rights like freedom of expression. We should be wary that disproportionate responses to issues of national security do not lead to a loss of fundamental rights for all Australians.”

“We must ensure that measures designed to protect national security do not diminish our democracy. Legislation must provide a proportionate, necessary and reasonable response to the perceived harms the Government seeks to address. When we abandon key democratic principles, such as a press that is free to report on matters of public interest without the journalist and their source being treated as possible criminals, then it is us and not terrorists who will have damaged our own way of life and undermined our democracy. We must think about the kind of society we want before removing our democratic checks and balances in the name of ‘national security’.”