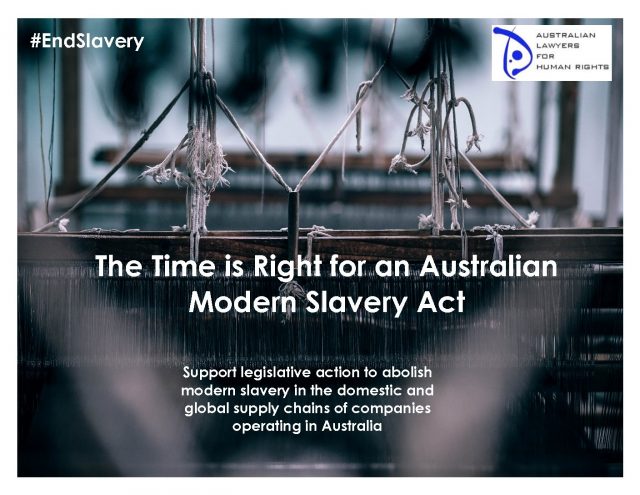 During last year’s Inquiry into establishing a Modern Slavery Act in Australia, the Government outlined a proposal to require large corporations operating in Australia to publish annual statements outlining their actions to address modern slavery throughout their business and supply chains. The Walk Free Foundation has estimated there are up to 40.3 million victims of modern slavery globally.

ALHR’s Business and Human Rights Subcommittee provided a Submission to the Government’s Public Consultation regarding the details of the proposed modern slavery reporting requirement in October 2017. ALHR is pleased that the Joint Standing Committee on Foreign Affairs, Defence and Trade’s December 2017 Report Hiding in Plain Sight has proposed a modern slavery reporting model that aligns in many aspects with ALHR’s recommendations.

Lauren Zanetti, Co-Chair of ALHR’s Business and Human Rights Subcommittee said, “the Committee’s recommendations regarding an annual modern slavery reporting requirement are an important step forward on the journey towards a Modern Slavery Act for Australia. ALHR is pleased that the Committee’s recommendations address some of the weaknesses in the equivalent reporting requirement in the UK’s Modern Slavery Act.”

The Committee acknowledged in its Report that its proposed modern slavery reporting model remains subject to consultation with the community and civil society. ALHR endorses many of the Committee’s recommendations, including that:

ALHR also urges the Government to continue to consult with civil society and other stakeholders regarding outstanding aspects of the proposed modern slavery reporting requirement. Examples of areas for further consultation include the details of the resourcing and functionality of the central repository, the appropriate penalties for non-compliance, the extent of Government guidance for business on the reporting requirement, how entities should measure the effectiveness of their efforts to address modern slavery and how the revenue threshold for reporting entities should be calculated.