Larrikinism under threat – Free Speech but only for bigots? Lawyers strongly condemn criminalisation of Political Comment and Satire 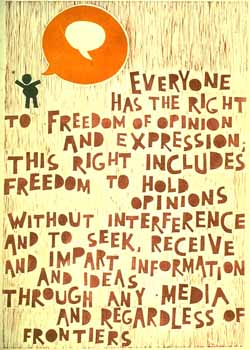 “Australian Lawyers for Human Rights (ALHR) has stated its opposition to proposed amendments to the Commonwealth Criminal Code* which create an offence for conduct which could be taken as implying that the person represents either a real or fictitious Commonwealth body. Such conduct is punishable with up to five (5) years imprisonment where there is intentional misrepresentation, and up to two (2) years even where there is no harm intended by the accused and no harm occurs” says ALHR President Benedict Coyne.

“We are very concerned,” says Mr Coyne, “at the chilling effect the proposed amendments will have on political comment and satire. This could include comedians and performers such as Shaun Micalleff, The Juice Media or examples such as that of the late John Clarke. At the moment, there is a very limited exemption for satirical conduct. But aside from this exemption, the test as to whether or not an offence is committed depends not on the perpetrator having malicious intent, or any harm being caused. The offence only requires that the perpetrator is reckless, with no harm needing to be proved. These are highly inappropriate and disproportionate restrictions on free speech.”

“The exemption is extremely narrow and limited to ‘conduct engaged in solely for genuine satirical, academic or artistic purposes,’“ says Mr Coyne. “What does this mean? It potentially means that our great artists and comedians, who make a living out of their artistry, may be facing jail time for satire and public comment. This is not the Australia and free democracy we know. The Minister for Justice must explain to the public, rather than just parliament, why such extreme measures are being taken.”

“Given that our government purports to be an ardent advocate free speech, whether in relation to marriage equality or racial discrimination, these proposed provisions are deeply troubling and appear to be aimed at silencing dissent,” says Mr Coyne. “Attempts by government to silence dissent are a very troubling sign that the health of our democracy is in jeopardy.”

Mr Coyne adds: “Australia is the only liberal democracy without a bill of rights. We have no legally protected express right to free speech and only a very limited implied freedom to political communication. Through this Bill, the government is sending a strong signal to the electorate that they have no sense of humour, no appetite for satire and that dissent will be quashed. It is another strong signal that Australia urgently needs a federal Human Rights Act or Bill of Rights.”

“The provisions are unnecessarily complex and far overreach the purported aim of limiting intentional false representations that a person is representing the Commonwealth,” says Mr Coyne.