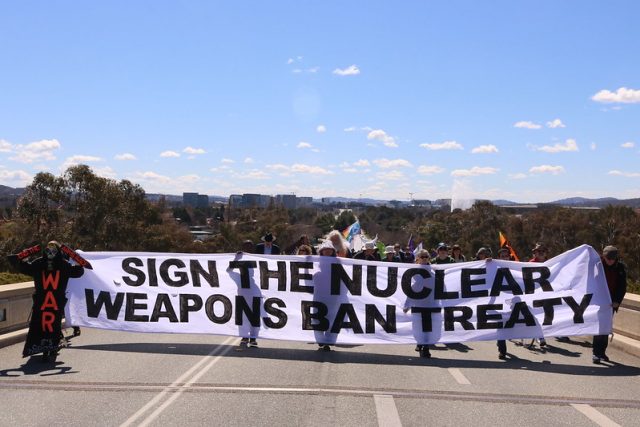 On Friday 22 January 2021 the United Nations Treaty on the Prohibition of Nuclear Weapons (TPNW) comes into force, establishing a comprehensive set of international legal prohibitions on participating in any nuclear weapon activities. It does so without the support of Australia’s Federal Government.

Australian Lawyers for Human Rights (ALHR) President Kerry Weste explains, “The TPNW marks the potential for a new global chapter for nuclear disarmament – one which acknowledges the catastrophic humanitarian consequences of any use of nuclear weapons. Australia has not yet signed or ratified the Treaty and unfortunately now finds itself out of step with international law.”

Countries who have ratified the treaty have agreed to binding undertakings not to develop, test, produce, acquire, possess, stockpile, use or threaten to use nuclear weapons, or to assist other countries in doing so. The TPNW also prohibits countries from allowing others to conduct these activities, or to deploy nuclear weapons, on their national territory or territory under their control. Importantly, it also obliges countries to provide adequate assistance to individuals affected by the use or testing of nuclear weapons, as well as to take necessary and appropriate measures of environmental remediation in areas contaminated as a result of the testing or use of nuclear weapons.

Australia has joined every other treaty that prohibits indiscriminate or inhumane weapons, as well as the Nuclear Non-Proliferation Treaty (NPT) and the South Pacific Nuclear Free Zone Treaty, yet the current Federal Government has not yet signed or ratified the TPNW. Indeed, Australia did not participate in the negotiation of the treaty at the United Nations in 2017 and, as recently, as October 2020 the Government voted against an annual UN General Assembly resolution welcoming the adoption of the treaty.

Ms Weste continued, “As outlined by the 2017 Nobel Peace Prize winning International Campaign to Abolish Nuclear Weapons (ICAN) in their “For The Record” report, the TPNW is consistent with Australia’s obligations under the NPT which require it to pursue negotiations in good faith on effective measures relating to nuclear disarmament. As such, the TPNW builds on and reinforces the NPT.”

“ALHR welcomes the fact that more than 250 Federal, State and Territory parliamentarians have now declared their support for the TPNW and we call on the Morrison Government to urgently reconsider Australia’s position and to engage with this new piece of international law.”