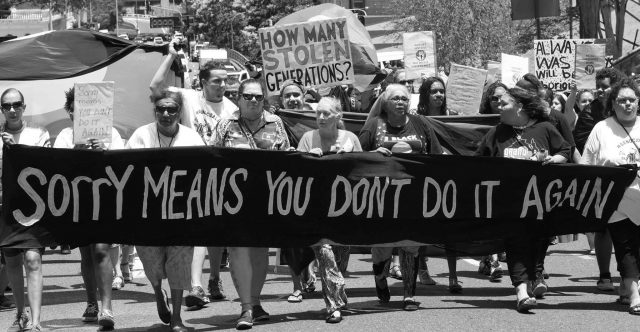 Australian Lawyers for Human Rights is alarmed that the NSW Government has rushed through laws which expand the powers of family and community services to permanently remove children from their families. ALHR fears the amendments to the The Children and Young Persons (Care and Protection) Act 1998 and the Adoption Act 2000, risk creating another stolen generation in NSW.

ALHR fears that measures which will see children in NSW’s foster care system placed in permanent homes within two years and which allow for forced adoptions risk creating another stolen generation in NSW.

ALHR President Kerry Weste said, “We are astounded that the NSW Government has rushed such a significant piece of legislation with profoundly serious consequences for the children involved. There has been inadequate consultation or transparency with key stakeholders including Aboriginal community bodies, and community legal advocates, yet these measures will predominantly impact Aboriginal and Torres Strait Islander children.”

“The amendments were tabled with no specific protections for Aboriginal and Torres Strait Islander children and their families. This is shocking given the lessons governments across Australia should have learnt from the Bringing Them Home report and the National Apology to the Stolen Generations.”

“Further the NSW Government’s failure to allow a meaningful public engagement and consultation process leaves these changes bereft of evidence-based best practice. Sadly, it is ultimately children and families who will suffer the consequences.”

“International law makes it clear that, in all actions concerning children, the best interests of the child must be a primary consideration. Measures that remove the requirement of parental consent in adoptions and introduce a two-year arbitrary timeframe may very well render it impossible for the best interests of individual children to be appropriately considered on a case by case basis.”

“No clear basis for the two-year timeframe has been explained, and ALHR is concerned that it does not provide enough time for struggling families who may be waiting on public health sector rehabilitation services, families who have mental health issues, families affected by domestic violence or families dealing with intergenerational trauma.”

“Separating families on a permanent basis after two years, sometimes without parental consent, raises serious concerns with respect to infringements of these obligations and could lead to another stolen generation. This is of particular concern considering the already extremely high rates of Aboriginal and Torres Strait Islander children in out of home care, some of whom have not been placed with Aboriginal foster carers in accordance with the fundamental goal of the Aboriginal and Torres Strait Islander Child Placement Principle.”

“ALHR reminds the NSW Government that Australia will appear before the UN next year to report on its compliance with the CRC.”