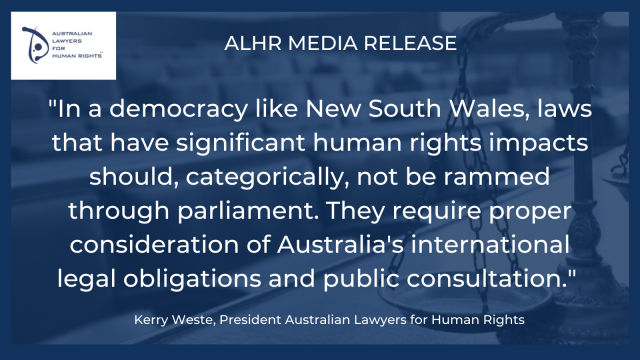 With support from NSW Labor, the Roads and Crimes Legislation Amendment Bill 2022 was rammed through the NSW Legislative Assembly late Wednesday night (in just five hours). After debate in the Legislative Council late last night it was put off until 10am this morning, Friday 1 April.

The law would dramatically increase penalties for people who cause “damage or disruption” on major roads or other transport assets across the state with fines of up to $22,000 payable, and jail time of up to two years, for anyone who “enters, remains on, climbs, jumps from or otherwise trespasses” major roads in the state and which “seriously disrupts or obstructs vehicles or pedestrians.”

ALHR President Kerry Weste said, “We cannot overstate the fact that, in a democracy like Australia, laws that have significant human rights impacts should, categorically, not be rammed through parliament in late-night sittings. They require proper scrutiny with  appropriate consideration of Australia’s international legal obligations and should involve processes of public consultation.”

“This is a Bill that would give the Minister far-reaching discretionary powers to prohibit public assemblies on any road, thereby overriding this right as enshrined in the Summary Offences Act. Peaceful protest action, like the Women’s March, student climate strikes and rallies for First Nations’ justice could all be affected,” she said.

“Every single adult and child in New South Wales has a human right to peaceful assembly that Australia is bound by international law to uphold*. The right to peaceful assembly protects the right of individuals and groups to meet and to hold a peaceful protest. This is a fundamental right that extends to all gatherings for peaceful purposes, regardless of the degree of public support for the purpose of the gathering.”

“Importantly, the right to peaceful assembly can only be legally limited in ways that are necessary and proportionate. By introducing this Bill, without any adequate consultation whatsoever and then ramming it through the Legislative Assembly within a matter of hours, it is impossible for the NSW Government or the Opposition to properly establish that the Bill meets these necessity and proportionality thresholds because there has simply been no time to properly consider this.”

“In ALHR’s view, imposing two-year jail penalties or crippling fines as a means to limit the rights of students, healthcare workers, First Nations people and their allies, environmental campaigners, disabled campaigners or any NSW resident who sits down on Macquarie Street to campaign for their rights, is neither necessary nor proportionate.”

“Further, the Bill may breach Australian’s implied Constitutional right to freedom of political communication, including peaceful protest, which the High Court has found is ‘indispensable to the exercise of political sovereignty by the people of the Commonwealth.’

“ALHR urges members of the NSW Legislative Council to oppose the Bill and ensure its human rights impacts are properly inquired into, including through public consultation.”

“This Bill is a glaring illustration of how desperately the NSW needs a Human Rights Act. The people of this state deserve to have their right to protest legally recognised and protected. The NSW Government, its Ministries and agencies should be required to consider our human rights whenever they make laws, policies or decisions.” Ms Weste said.