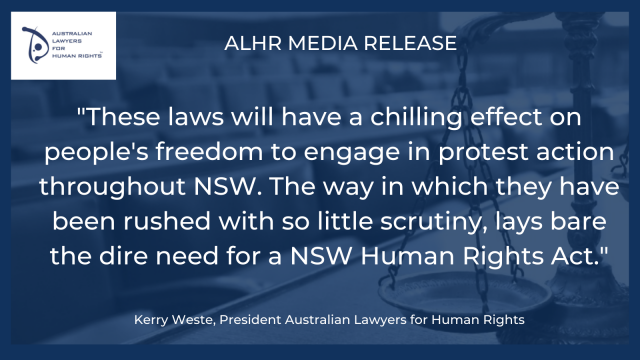 With support from NSW Labor, the Roads and Crimes Legislation Amendment Bill 2022 was rammed through the NSW Parliament after being introduced late Wednesday. Australian Lawyers for Human Rights (ALHR) President Kerry Weste said, “ALHR is deeply troubled by the Perrottet Government’s new measures which threaten the democratic rights and freedoms of everyone in NSW.”

The new laws dramatically increase penalties for people who cause ‘disruption’ on major roads or other transport assets, such as train stations, across the state with fines of up to $22,000 payable and jail time of up to two years.

Ms Weste noted, “These laws will have a chilling effect on people’s freedom to engage in protest action throughout NSW. Measures that restrict the exercise of fundamental human rights should categorically not be rushed through parliament in little more than three days. This undermines our democracy in NSW.”

“Every single adult and child in New South Wales has an internationally-recognised human right to meet and hold a peaceful protest. This is a fundamental right that extends to all gatherings for peaceful purposes, regardless of the degree of public or political support for the purpose of the gathering.”

“Importantly, the right to peaceful assembly can only be legally limited in ways that are necessary and proportionate to any harm that those restrictions seek to address. Penalties of up to two years in prison for engaging in peaceful yet ‘disruptive’ or ‘non-government sanctioned’ protest is not a proportionate response,” she said.

“The measures are far-reaching, far too vague, and potentially impact a wide range of protest activity including action, like the Women’s March, student climate strikes, anti-war rallies or First Nations justice railles. Historically, protests have inspired positive social change and the advancement of human rights. Protests encourage the development of an engaged and informed citizenry and strengthen representative democracy by enabling direct participation in public affairs.”

“These new laws, and the way in which they have been rushed with so little scrutiny, lay bare the dire need for a NSW Human Rights Act. The people of this state deserve to have their rights to peaceful assembly and freedom of expression protected in law. They deserve a law that requires the NSW Government to properly consider our rights before ramming through draconian new laws,” Ms Weste said