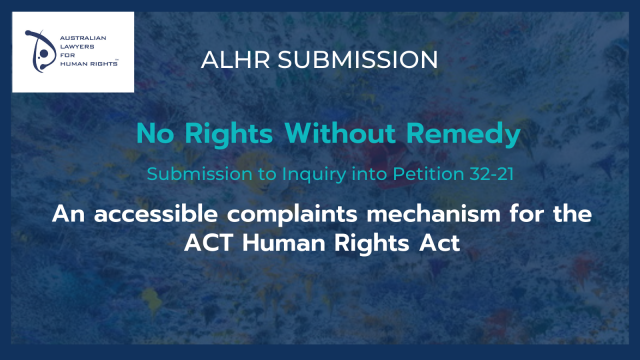 Thanks to over 500 signatures received on our ALHR and ACTCOSS  “No Rights Without Remedy” Petition, the ACT Legislative Assembly is holding an Inquiry into whether the ACT Human Rights Act should be amended to include an accessible complaints mechanism.

Unfortunately, while the ACT Human Rights Act was drafted to protect individuals against breaches of their human rights by government and government agencies, it does not provide an accessible way for people to make a complaint. Currently, when a person believes their human rights have been breached, the only recourse available to them is expensive and complex legal action in the ACT Supreme Court. This process is simply too difficult for most people to access.

ALHR joined with ACTCOSS , the Human Rights law Centre and Civil Liberties Australia to promote our petition calling for a more accessible complaints process. We are asking for the ACT Human Rights Act to be amended so that individuals can make a complaint to the ACT Human Rights Commission (HRC) if they believe that their tights have been breached.. If it can’t be resolved, the Commission could then refer the complaint to the ACT Civil and Administrative Tribunal (ACAT). This would provide a simple, no-cost process that can be navigated by members of the ACT community.

ALHR President Kerry Weste said, “We already know these pathways work for the community, as they are currently in utilisation for other complaints heard by the HRC. Moreover, a very similar process is available under the QLD Human Rights Act and is benefiting people in that state.”

“People in the ACT deserve laws that ensure everyone can live in safety, in freedom, and with dignity. Every person in the ACT is entitled to be treated fairly and equally, with compassion and respect. However, we know from experience that human rights are at risk of being rendered meaningless if they cannot be legally enforced.”

“The people of the ACT need easier, cheaper and simpler pathways to make a complaint if the ACT Human Rights Act is to realise its true potential to protect and promote human rights.”

(1) Noting that there is a human right to an effective remedy when human rights are violated, The Human Rights Act 2004 (ACT) should be amended to include an accessible two-tiered complaints mechanism that specifically enables:

(2) The existing infrastructure of the HRC and ACAT currently in utilisation for discrimination and other complaints should be used in order to provide a no-cost, simple pathway for individuals to make complaints.

(3) For the HRC and ACAT to effectively respond to the additional workload that creating a new complaints mechanism would produce, the ACT Government should:

(4) The ACT Government should accompany any amendments to the Human Rights Act 2004 (ACT) with: