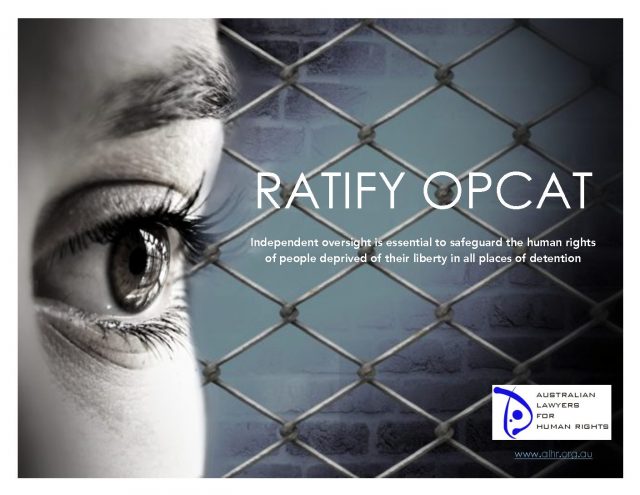 OPCAT was adopted in 2002 and entered into force in 2006 and it is enforced by the United Nations Subcommittee on Prevention of Torture and other Cruel, Inhuman or Degrading Treatment or Punishment (SPT). As at today’s date there are now 86 state parties and 15 states are signatories.

“After the shocking revelations of systemic institutional abuse of youth in detention in the Northern Territory, the Cleveland detention centre in Queensland and the Victorian Government’s treatment of children in maximum security adult prisons, the ratification of OPCAT provides significant hope that the Turnbull government is taking a positive step to remedy a legacy of injustice and take seriously the pledges it made in taking up a seat on the UN Human Rights Council,” said ALHR President Benedict Coyne.

“Australia’s ratification of OPCAT will require it to establish a national system of inspections of all places of detention. The monitoring processes that Australia will be required to implement within Australia will increase transparency and accountability in places of detention and this will be of significant assistance in identifying and preventing human rights violations,” Said Coyne.

“However, after a tumultuous year for Australia’s human rights record with widespread significant criticism by multiple United Nations human rights bodies regarding its treatment of refugees and asylum seekers, ALHR is very concerned by the government’s intention to exclude places of offshore detention from scrutiny under OPCAT. Places of detention outside Australia for which Australia is responsible by virtue of the fact that it funds and effectively controls them, should not be exempted from this process of independent oversight and transparency.”

“ALHR welcomes this announcement as a significant step toward establishing an acceptable level of oversight of places of detention under Australian responsibility, consistent with our international obligations. However, ratification must be backed by sustained action. This government must now properly implement the legal protection of basic human rights standards in all places of detention whether onshore or offshore.”

Coyne continued: “Governments cannot be picky about human rights, they are universal principles that must be protected and respected equally to all persons under the Australian government’s effective control.”