Human Rights responses to arguments against a YES vote 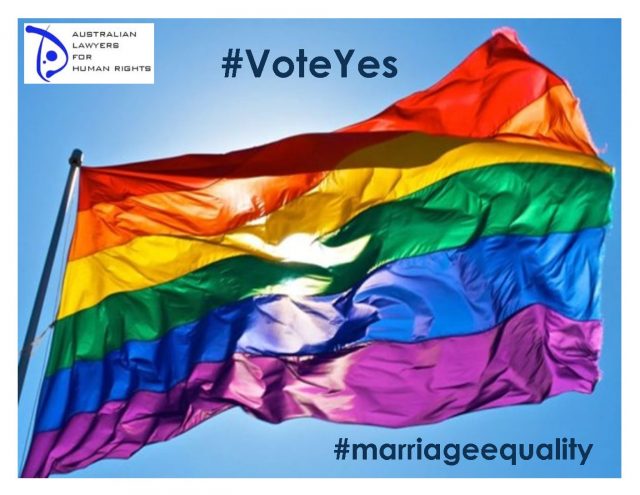 ALHR would like to share with you some human rights-based responses to some of the main arguments being put forward by the ‘no’ campaign.

It is not true that:

Check out the following resources for an explanation of some of the very real legal differences between marriage and de facto or registered relationships in Australia.

Watch this video  and read this article.

Basically, with ‘marriage’ – whether celebrated as a civil or religious union –  a person obtains various State and Federal legal rights based purely on the fact of their status as a married person.  With other registered or non-registered relationships it is generally still necessary to prove one’s relationship before obtaining those rights.  The rights obtained through other relationships than marriage are not necessarily the same as those under marriage and can differ between States and Territories. For example, a de facto relationship registered in NSW is evidence of that fact in NSW but is not binding on the Family Court.

It will limit religious freedom

Whose religious freedom are we talking about? Bear in mind that:

1.     religious freedom includes the right not to espouse a religion – to be secular and not be subjected to other peoples’ religions, and

2.     religious freedom in the sense of the right to express one’s religion (or secularity) must be balanced against other human rights.

Ministers of religion are already permitted to refuse to solemnise marriages for any reason and so to create a specific exemption for them in relation to LGBTI persons is both legally unnecessary and selects the LGBTI community as a target for discrimination.  Religions such as Catholicism are for example not obliged to solemnise the marriages of divorced people on the basis that this would be against their beliefs  – even though Australian society overwhelmingly supports the right to divorce.

Similarly, religious bodies and organisations are already able to refuse goods and services to LGBTI couples under existing religious exemptions to anti-discrimination laws. For example, in NSW the law grants any “private educational authority” immunity from homosexual discrimination laws with respect to employees and applicants for employment. Similar exemptions exist under Commonwealth laws, for example in Section 37 of the Commonwealth Sex Discrimination Act.

This situation will not change because of a ‘yes’ vote or with same sex civil marriages.  As stated in the article ‘If Australia says ‘yes’, churches are still free to say ‘no’ to marrying same-sex couples’ :

What is clear ….  is that no one can compel any official church leader in Australia to perform marriages against its own policy, and no church will be forced to change its current marriage policy, rituals or doctrines.

To refuse to extend exemptions to individuals who self-identify as having opposed religious views (eg so they do not have to provide services with respect to marriages of LGBTI persons) may limit the expression of those individuals’ religions –  but in a balanced and justifiable manner, taking into account the harms that would be caused by allowing them to express their own religion in a discriminatory manner, and bearing in mind the rights of the parties wishing to marry to exercise their own religious freedoms and family rights.

It will limit free speech.  It will become illegal to oppose marriage equality in word or even thought. If the state redefines marriage, it also redefines how you can speak, think, advocate and believe about marriage.

Legislation does not and cannot limit how people think.  Freedom of private, unexpressed belief is an essential aspect of both freedom of religion and of freedom of speech.

But expression of one’s beliefs through speech or action is not privileged above other human rights and has to be weighed against the rights of others that might be impacted, and the potential harms caused by that expression. In Australia, unlike in America, freedom of speech is not enshrined in our constitution. The common law in Australia has identified an implied freedom of political communication but those propounding freedom of speech in Australia are wrong to state that it is a freedom that trumps any other human right or is found expressly in our constitution in an unqualified way.

From 1961 to 2004, the Commonwealth Marriage Act did not contain a definition of marriage as being between a man and a woman and during that time none of these arguments or concerns were put forward.

Legislation is also unlikely to prohibit expression of opinions contrary to marriage equality, or even advocacy against marriage equality, so long as the speech involved does not amount to vilification. And anti-vilification law is often legislated to make it hard for a plaintiff to prosecute. For example, in NSW a defendant to a vilification complaint can rely on multiple defences including public acts “done reasonably and in good faith, for academic, artistic, religious instruction, scientific or research purposes or for other purposes in the public interest, including discussion or debate about and expositions of any act or matter”: s 49ZT of the NSW Anti-Discrimination Act.

This would not be the situation unless existing exemptions for those holding religious ceremonies (discussed above) are removed by any amending legislation, which is extremely unlikely.

This may well be the case under any amending legislation.  ALHR believes this is the correct outcome as people should not become marriage celebrants if they hold prejudices about which persons should be allowed to marry.

That is already the situation in that anti-discrimination laws protect LGBTI Australians from being discriminated against by businesses or public officials.  ALHR believes that this is the correct approach.

Our society has evolved to the point that we no longer accept that private service providers should be able to refuse service or entry to any group which is identified on a discriminatory basis (such as “non-whites”).   This means that our society should not accept any purported ‘right to refuse’ service to people based on their being a member of the LGBTI community.

It will lead to an officially sanctioned ‘de-gendering’ of marriage

Yes.  ALHR believes that this is a desirable and necessary outcome in order to realise equality before the law for all members of our community.

It will lead to changes in what is taught in schools

There is no connection whatsoever between the curriculum in public schools and amending the Marriage Act to allow marriage equality.  If this is a reference to the ‘safe schools’ programme, that is not a compulsory part of the Australian curriculum either, and is not related to the issue of marriage equality: see this Conversation Fact Check.

We cannot comment on what is taught in the curricula of religiously-based schools.  However it should be noted that, as one writer says in Breaking news: marriage has very little to do with religion (and vice versa), given that the religious concept of marriage already differs from the civil concept of marriage:

… the passage of marriage equality will have no impact on religious teaching on marriage ethics. It will merely continue our history of divergent and wider views of marriage.

Religious communities can continue to make decisions about their own ethical and moral standards for relationships. Marriage equality won’t change that. But they should also respect the changed moral compass of Australian society with regard to marriage.

(3)  Nothing in section 21 renders it unlawful for a person to discriminate against another person on the ground of the other person’s sexual orientation, gender identity, marital or relationship status or pregnancy in connection with the provision of education or training by an educational institution that is conducted in accordance with the doctrines, tenets, beliefs or teachings of a particular religion or creed, if the first-mentioned person so discriminates in good faith in order to avoid injury to the religious susceptibilities of adherents of that religion or creed.

It will impact upon parental rights

There is no legal connection between parental rights and amending the Marriage Act to allow marriage equality.

If the reference is to changes in curricula: parents have no direct rights over the curriculum that is taught in public schools.  We cannot comment on the situation in religiously-based schools.

It will impact upon employment

Under Australia’s anti-discrimination laws, churches already enjoy very wide-ranging exemptions allowing them to hire and fire on the basis of sexual orientation, marital status and other personal characteristics, as described above (section 38 of the Commonwealth Sex Discrimination Act).  While we do not agree that this is desirable, the situation is unlikely to change.

The ability to marry will not of itself impact on that nature of any person’s employment relationship or employment responsibilities.

We note that the Catholic Church has said that it will not employ, or will dismiss if already employed, persons married to LGBTI partners.

It will impact upon retirement homes

It will impact upon business

This would appear to be the case only if employers wish to discriminate against employees married to LGBTI partners. Where employers do not wish to discriminate, it is likely rather that they will find employee well being and productivity enhanced in a workplace which is not discriminatory.  The recognition of one’s family life and status is crucial for the existence and well-being of an individual and for their dignity.

If the meaning of this argument is that anti-discrimination provisions will have a negative effect upon business income, we fail to see how this argument can be made out.

It will affect the freedoms of all Australians, not just professional clerics

It will only affect the freedoms of Australians who wish to act in a discriminatory manner on the basis of a person’s sexuality or gender, contrary to existing anti-discrimination legislation.  Other Australians will not be affected.

This argument misunderstands the dynamic and contextual nature of human rights law which balances the rights of governments to legislate in the best interests of the community, on the one hand, against the impact on individuals when governments fail to legislate so as to reflect social realities and that failure results in discriminatory or harmful treatment of those individuals in breach of their human rights.

The European Court of Human Rights has noted how the social acceptance and support for marriage equality has grown over the years and in 2015 in CASE OF OLIARI AND OTHERS v. ITALY the Court required that Italy legislate to allow same sex unions (although the reasons given by the majority and minority differed.)  As a result, in 2016 Italy introduced civil unions, which had previously not been possible, and which are open to LGBTI couples.