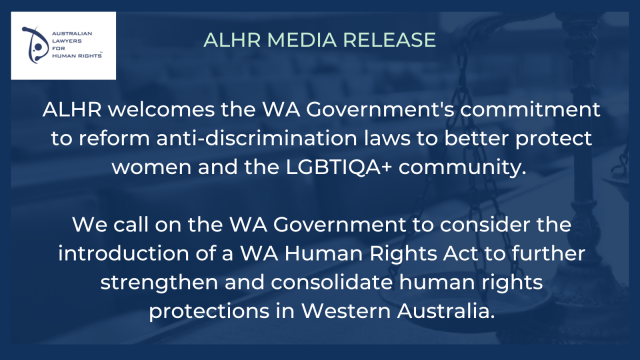 Australian Lawyers for Human Rights (ALHR) has welcomed the West Australian Attorney-General John Quigley’s announcement that the state’s anti-discrimination laws will be modernised to provide stronger protections for women and LGBTIQA+ communities.

The reforms will implement most recommendations made by the Law Reform Commission of Western Australia (the Commission) in its review of the state’s Equal Opportunity Act 1984 which made 163 Recommendations based on 995 submissions.

ALHR Vice President and Co-chair of LGBTIQA+ Rights, Nicholas Stewart, said, “West Australian anti-discrimination laws have lagged behind other states and territories in the scope and circumstances in which they offer protection. These long-awaited reforms will update the protections afforded to women and LGBTIQA+ people and help to ensure the state’s anti-discrimination laws reflect community expectations, are effective and are afforded to diverse and vulnerable populations.”

Stewart continued, “One important amendment will remove the ‘significant disadvantage’ test applied in sexual harassment cases, which has hampered complainants. Other reforms will give greater protections to LGBTIQA+ communities, such as amendments to limit the carve-out exemptions for religious schools’ ability to discriminate against trans, non-binary and gender diverse staff and students. Discrimination on the grounds of a person’s sexuality, gender identity and sex characteristics, must be unlawful.”

The Commission also recommends the introduction of a separate protected attribute of ‘variations of sex characteristics’. Mr Stewart noted, “This very important amendment would recognise a poorly understood, all too often marginalised population by properly distinguishing issues of sex and gender. It is hoped this will contribute to a better understanding of the particular needs and experiences of the intersex community.”

“These reforms are absolutely vital to protecting the rights and well-being of Western Australia’s women and the LGBTIQA+ community and represent welcome progress in ensuring that anti-discrimination laws meet Australia’s international human rights obligations.”

While applauding the reforms ALHR also noted that more can be done to protect the dignity and safety of everyone in Western Australia. Mr Stewart said, “Unlike Queensland, Victoria and the Australian Capital Territory, Western Australia is yet to introduce a Human Rights Act to create a framework that ensures everyone’s human rights are at the centre of government decision-making. ALHR therefore calls on Attorney-General Quigley to further strengthen and consolidate human rights protections in Western Australia by accompanying reforms to the Equal Opportunity Act with the introduction of a WA Human Rights Act.”