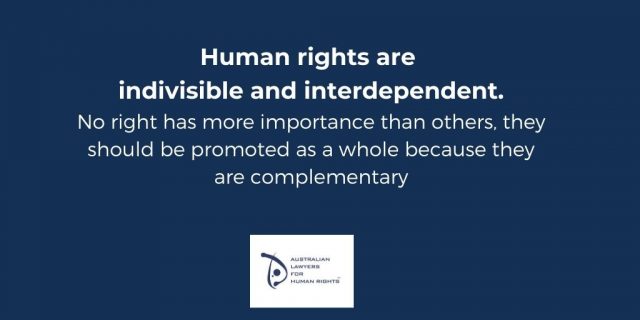 Australian Lawyers for Human Rights (ALHR) has criticised the final report from the Joint Select Committee on the One Nation Anti-Discrimination Amendment (Religious Freedoms and Equality) Bill 2020 (the Bill).

ALHR LGBTI CoChair Georgia Burke said, “The report’s findings fail to reflect the considerable evidence provided at the Committee’s hearings. ALHR is shocked by reports that members of the ‘Parliamentary Friends of Religious Freedoms’ (the PFRF) blocked important stakeholders from giving evidence at hearings if their views did not align with PFRF’s routinely expressed vitriol towards expert witnesses during evidence, and voted together to remove any references to opposition to the Bill from the final report.”

“The Inquiry into this Bill was not conducted according to the principles of representative democracy or procedural fairness. If the NSW Government intends legislation to ‘protect’ religious freedoms then it should commission an inquiry that affords all concerned parties the opportunity to submit and give evidence. Its final report should reflect all of the evidence received and make findings based on fact.”

President of ALHR, Kerry Weste, said, “This Bill is an inherently flawed piece of  legislation that completely ignores the NSW Government’s binding international legal obligations to uphold all human rights equally. There is no absolute right under international human rights law to manifest or act upon one’s religious belief in a way that impacts upon others.  Religious freedom does not mean freedom to visit harm upon others in the name of one’s own religion.”

Weste continued, “The Bill would create impractical, unprecedented and extremely far-reaching protections for religiously-motivated discrimination. It also contains provisions that risk enabling religious organisations to challenge any NSW program or law if the program or law is contrary to the religious doctrine of that organisation, and regardless of a government’s legitimate policy objectives.”

“The appropriate balance between freedom of religion or belief and other human rights would best be served by the passage of a Human Rights Act to protect everyone in NSW equally .”