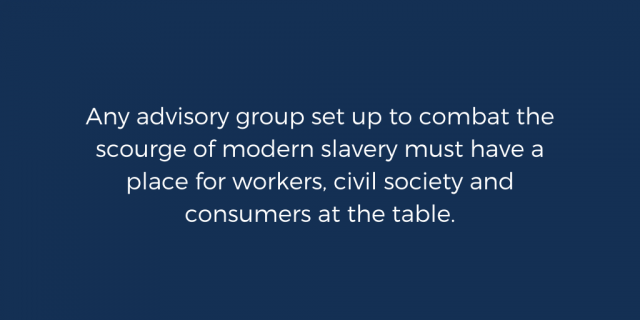 In an initiative led by the Australian Council of Trade Unions and Human Rights Law Centre, ALHR is amongst a coalition of civil society organisations, unions and academics that has called on the Department of Home Affairs to include union and human rights experts in the newly established Modern Slavery Expert Advisory Group to ensure workers’ rights and not just the interests of business are at the centre of the Government’s plan to eradicate modern slavery. The Morrison Government announced the members of the Expert Advisory Group last week revealing over half of the appointments were from large Australian companies. There are no representatives from either the Australian Council of Trade Unions, individual unions or civil society organisations.

At least 70 people, including many leading experts in the field of modern slavery, had nominated to be part of the Group, including ALHR.

Madeleine Bridgett, Co-Chair of ALHR’s National Business and Human Rights Committee said, “It is deeply concerning that the recently established Modern Slavery Expert Advisory Group does not include any representatives from human rights or anti-slavery organisations, or the voices of workers or consumers. This means that governmental efforts to eradicate modern slavery will be driven by corporate businesses, entirely excluding those who directly experience modern slavery.”

A copy of the open letter is available here

ALHR media contact for all business and human rights enquiries: