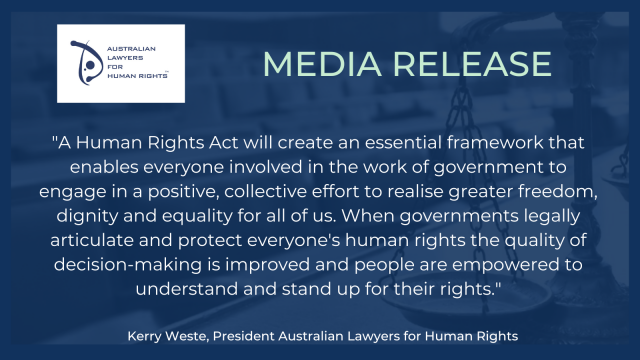 This weekend we celebrated Human Rights Day and the 74th anniversary of the Universal Declaration of Human Rights (UDHR), a document which underpins all international human rights law. This year’s theme – freedom, dignity and justice for all – offers an opportunity to reflect on successive governments’ failure to legally protect those principles in law for all Australians.

Australia was a founding member of the UN and one of eight nations involved in drafting the UDHR. We should be very proud of the part we played as a nation and of our human rights heroes like Dr Herbert Vere Evatt, then President of the UN General Assembly, who oversaw the adoption of the UDHR, and Colonel William Roy Hodgson who, as a member of the committee chaired by Eleanor Roosevelt, was influential in the UDHR’s drafting and inception.

How can it be then, that Australia remains the only developed Western democracy bereft of a national Human Rights framework to legally protect the rights and freedoms of all Australians? We should all be alarmed at the failure of our legal system to protect fundamental rights. These rights have evolved as the very foundations of democracy. The UDHR calls upon everybody to stand up for human rights and Australians need governments in all of our domestic jurisdictions that are prepared to do so.

A Human Rights Act will create an essential framework that enables everyone involved in the work of government to engage in a positive collective effort to realise greater freedom, dignity and equality for all of us. When governments legally articulate and protect everyone’s human rights the quality of decision-making is improved and people are empowered to understand and stand up for their rights. Australians want to live in a society that, through everyday actions and decisions, upholds our rights and the rights of others, working together for a more sustainable, just, and prosperous society – for this generation and those yet to come.

As Australian Human Rights Commission President Rosalind Croucher said this week, “With all the States and Territories with Human Rights Act, and one at the federal level, we will have the solid bedrock for rights protections across Australia and the tools to shift the focus of decision making and policy development through a human rights lens.”

We now have Human Rights Acts in the ACT, Victoria and Queensland. This protection is also something that is enjoyed by the citizens of every other comparable democratic nation in the world. These places have not descended into chaos as a result of entrenching protection for human rights in law.

It is time to reignite the dialogue about a federal Human Rights Act for Australia. Every Australian deserves to be treated fairly and equally.  A Federal Human Rights Act would ensure that, instead of selectively enshrining Australia’s international legal obligations in Commonwealth legislation, the human rights of all Australians are protected equally. This is about good governance. The people of Australia deserve nothing less.

1. When they are legally protected, human rights are the catalyst to progress.

We know that human rights are the catalyst to progress. Improvements globally in the rights of women, children, Indigenous people, refugees, people with disability, racial, ethnic and religious minorities, LGBTIQA+ people – all these efforts are anchored in human rights. But if our rights are not legally protected they are always at risk of being ignored. Australia must introduce a Federal framework to articulate and protect everyone’s human rights. As the UDHR nears its 75th anniversary, it’s time for all Australian politicians to commit to protecting dignity, freedom and justice for all.

2. Human Rights are for everyone, everywhere, all of the time.

The UDHR enshrines the rights of all human beings. Every person in Australia has human rights. They are universal. They belong to you, no matter who you are or where you come from. Human rights legally articulate the values that we hold most dear, like freedom, equality, dignity. They protect our safety and quality of life and belong to all of us from birth until death, no matter our race, gender, religion, abilities, political beliefs, sexuality, age or any other characteristic. Nearly 75 years later, the UDHR continues to inspire a vision for change and a more equal and inclusive world of benefit to everyone. It’s time for Australia embrace that vision.

3. The solutions to today’s greatest crises are rooted in human rights.

Rights violations reverberate across communities and across generations. As Australia faces challenges like pandemics, exploding inequalities, racism, sexism, discrimination, climate change – the values enshrined in international human rights instruments like the the UDHR, provide guideposts for our collective actions that do not leave anyone behind. Human rights, when legally protected, act as guardrails for policies, and a blueprint for concrete action towards dignity, security and equality. As the challenges evolve, Australia must deliver on the promise of the UDHR to achieve human rights for all.

4. We need an economy that invests in human rights and works for everyone.

In the true spirit of UDHR, Australia must adopt economic approaches that do not carry an untenable social or human cost by entrenching ever increasing inequalities. We need to renew the social contract between Government and the people and within our communities, so as to rebuild trust. A Human Rights Act for Australia will create a legal framework that embraces a shared and comprehensive vision of human rights on the road to just and sustainable economic growth.

The core international human rights treaties offer a global blueprint for national and local laws and policies and a bedrock for the 2030 Agenda for sustainable development. If we are to realise all rights: economic, social, cultural, civil and political we need a comprehensive legislated human rights framework.

6. We need to stand up for our human rights and those of others.

The UDHR calls upon everybody to stand up for human rights. We all have a role to play. A Human Rights Act will create an essential human rights framework that enables everyone involved in the work of government to engage in a positive collective effort to realise greater freedom, dignity and equality for all. Australians want to live in a society that, through everyday actions and decisions, upholds our rights and the rights of others, to work together for a more sustainable, just, and prosperous society – for this generation and those yet to come.

It’s time for a Federal Charter of Human Rights