A huge win for democracy as the Senate rejects Government regulations which would silence Australian charities. 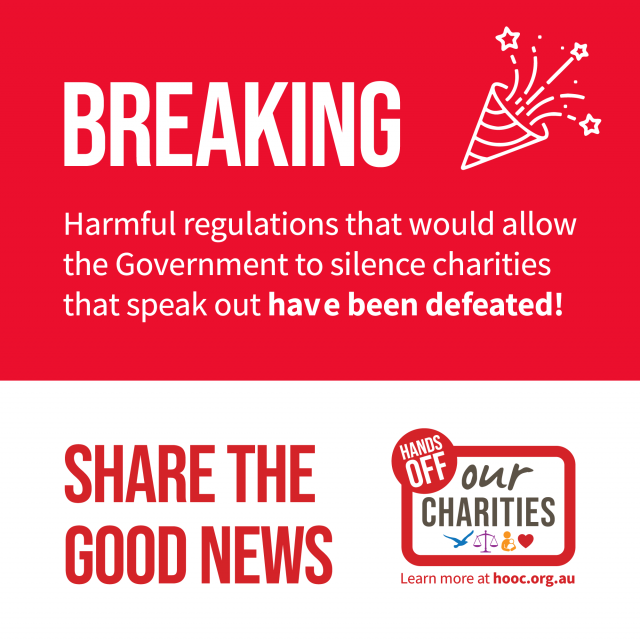 Charity isn’t just about helping those in need – it’s about working for systemic change. This win ensures the long tradition of charitable advocacy continues. #HandsOffCharities

A WIN FOR DEMOCRACY

Australia’s charities and not-for-profit sector is today relieved that common sense has prevailed, with the Federal Opposition and crossbench joining forces to disallow the Morrison government’s heavy-handed charity regulations.

The Hands Off Our Charities (HOOC) alliance of more than 100 of the nation’s most respected charities has been resisting the Morrison Government’s attempt to grant the Federal Charities Commissioner the power to investigate and deregister charities on a whim.

Today, a crossbench disallowance motion put forward by South Australian Senator Rex Patrick was successful in the Senate, effectively stopping the Government’s proposal in its tracks.

HOOC Spokesperson Ray Yoshida says that charities across the country will breathe a sigh of relief today.

“Despite the Government’s efforts to silence those who speak up, the crossbench parties and the Federal Opposition saw major warning signs in Minister Sukkar’s proposals and stood shoulder-to-shoulder to stop it.” Mr Yoshida said.

An independent report commissioned by HOOC found that the Morrison Government’s new burdensome regulation would have cost the sector up to $150 million in additional administration costs to charities and not-for-profits in the first year alone.

“This incredible result means that more than $150 million that would have been spent on administration costs can now be diverted back into essential services such as emergency food relief, family violence and mental health support,” Mr Yoshida said.

The Benevolent Society CEO Lin Hatfield Dodds said her organisation has fought strongly against the introduction of these unnecessary regulations and are pleased they’ve been disallowed.

“This outcome will help protect our sector’s freedom of speech and prevent our support for vulnerable people and communities being burdened by additional costs and red tape.,” Ms Hatfield Dodds said.

“We know that positive social change comes when people are heard. Efforts should be made to nurture this, not take it away.”

“Our charity sector works tirelessly to service the nation’s most disadvantaged people and cannot have its precious resources tied up in bureaucratic red tape. We thank the Senators who voted to scrap the proposed regulations and secure the only sensible outcome that could have emerged from this,” Mr Wishart said.

ACOSS Acting CEO Edwina MacDonald labelled the victory a common sense win for all charities providing essential services to people during the pandemic.

“We thank those Senators, including Labor, the Greens and key crossbenchers, who voted to protect charities, ensuring these unnecessary, burdensome regulations did not proceed.

“Over the past 18 months, the community sector has been crucial in helping hundreds of thousands of people endure the pandemic.

“Community organisations everywhere can now focus on their core work without worrying about the negative impact of these changes.”

George Selvanera, Acting CEO of the Victorian Aboriginal Legal Service, added “We’re relieved that the proposed regulations have been stopped by crossbench, Green and Labor senators, but charities had to use a lot of time and resources to win this fight. The Morrison Government needs to get its priorities straight and invest more resources into not-for-profits rather than trying to silence and control them through regulations.”

Lyn Morgain, Oxfam Australia Chief Executive, said “The Senate is to be commended for its decision to bring a stop to what would have been regressive and unnecessary measures.

“These proposed changes would only have served to waste valuable public donations, tie charities up in unnecessary administration and stifle not-for-profits from speaking out on the issues that are important to their supporters and communities.”

Save the Children Australia CEO, Paul Ronalds said “These changes would have handed an unprecedented amount of power to the Charities Commissioner to shut down a charity for advocating on vital social issues. It struck us as totally outrageous that the Government would focus on trying to make life harder for charities in the midst of a global pandemic. Australia’s charities are the lifeblood of our country, and we thank those who sided with common sense today to stop these unfair and unjustified regulations from going ahead.”