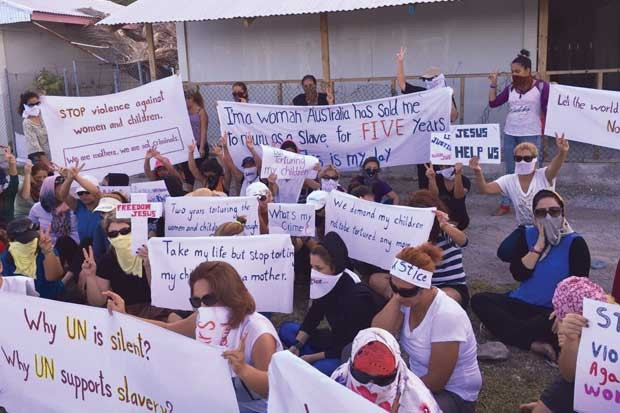 Idil Mohamud and Sophie Hantz are students of the La Trobe Law School, undertaking an internship with Australian Lawyers for Human Rights  and are currently compiling a brief of evidence for ALHR’s Women and Girls’ Rights Subcommittee for a possible CEDAW complaint on behalf of the asylum seeker and refugee women in Nauru.

Idil and Sophie have written a blog about their experience so far on the La Trobe Law and Justice Blog which we share below:

The island of Nauru is just 21 square kilometres in size, and its population stands at approximately 10,000, of which over 1000 are refugees or asylum seekers who have been sent there by the Australian government. Around 80 percent of the island is uninhabitable due to extensive phosphate mining. Nauru is impoverished, employment opportunities are scarce, and basic services such as education and healthcare are lacking.[1]

Asylum seekers who are sent from Australia to Nauru are detained in the Nauru Regional Processing Centre (the Centre) while they undergo the prolonged refugee determination process. The conditions at the Centre are so appalling that recently over 100 former employees of offshore detention centres demanded that the Australian government abandon offshore processing.

Of particular concern is the fate of the women and girls who are detained on Nauru at Australian behest.  Evidence demonstrates that they continue to endure squalid conditions and serious sexual violence.   The Australian government is in gross breach of its international obligations, in particular under the Convention on the Elimination of All Forms of Discrimination Against Women, because of its failure to protect these women and girls from harm.[2]

The Nauru Files, published by The Guardian on 10 August 2016, include more than 2,000 leaked incident reports illustrating the extent of the systematic abuse carried out on Nauru against asylum seekers and refugees, and which is seemingly condoned by the Nauruan and Australian governments. The reports detail an alarming trend of gender-based violence – in particular, rape, sexual assaults and indecent assaults appear to be endemic.   Women in the Centre are regularly harassed, assaulted and even offered (by Commonwealth-contracted guards) contraband or additional benefits such as longer showers in exchange for sexual favours. There is also evidence that women and girls who have been resettled in the Nauru community are the victims of rape and other sexual violence.   In one reported case, a refugee named Nazanin was found naked outside the Centre. She was taken to police bruised, deeply traumatised and with bite marks all over her body. Police drove around Nazanin for 45 minutes before being taken to the local station. Nazanin was mute with the trauma of the incident and was non-responsive when police questioned her. She was deemed non-compliant and authorities failed to register the matter as assault or collect any forensic evidence. It was only after protests by asylum seekers and refugees on Nauru, at great personal risk, that the Nauruan police later accepted that Nazanin had been raped.

Other instances where refugees have been raped and fallen pregnant as a result, demonstrate the callous treatment meted to them by Australia.   One example is provided by “S99”, a woman who, after being resettled on Nauru as a refugee, was raped while suffering an epileptic seizure.  When S99 fell pregnant as a result of the rape, she requested an abortion.  The Australian government sent her to Papua New Guinea for the procedure even though abortion is illegal there,[4] and despite the fact that extensive advice demonstrated that S99’s mental and physical health needs would not be met in PNG.  In May 2016, the Federal Court of Australia held that the Minister for Immigration had failed to fulfill his duty of care and S99 was ultimately brought to Australia for treatment.[5]

The Nauru Files are just the latest source of evidence of such gender-based abuses; inquiries including The Moss Review (2015), the Senate Select Committee Inquiry into the Nauru Detention Centre (2015) and the Report by Australian Women in Support of Women on Nauru (2016) have also published similar evidence and concluded that these violations are well known by service providers inside the Centre.

Incidents of gender-based violence against refugees and asylum seekers are largely unreported to Nauruan authorities due to fears of reprisal and backlash. Unfortunately, as victims have genuine fears that complaining will negatively impact on their applications for refugee status or resettlement, there is a general reluctance to report instances of abuse.  Further, there are allegations of security personnel at the Centre acting as the perpetrators in these incidents:  if true this makes it both less likely that victims will report, and less likely that investigations will ensue if reports are made.

To complicate matters, Nauruan police have stated that refugee complaints are fabricated for media purposes. The Nauruan President, Baron Waqa, recently claimed that the allegations in the Nauru Files were “unfounded” and “cooked up”[6]. These sentiments were then echoed by the Australian Minister for Immigration, Peter Dutton, who dismissed the Nauru Files as “false allegations [made] in an attempt to get to Australia.”[7] Both statements by authorities contribute to a broader and more dangerous conversation whereby the distrust of women and girls enables a culture of gender-based discrimination and violence.

Australia controls the lives of the women and girls who are detained or living in the community as refugees in Nauru. By forcing them to live in an environment in which they are subject to systemic and relentless gender-based and sexual violence, the Australian government is engaging in a serious violation of international human rights obligations. It has been demonstrated time and again that Australia’s offshore detention program is a national shame. The only way the Australian government can hope to remedy these horrors is to ‘Bring Them Here’.

As published on the La Trobe Law and Justice Blog