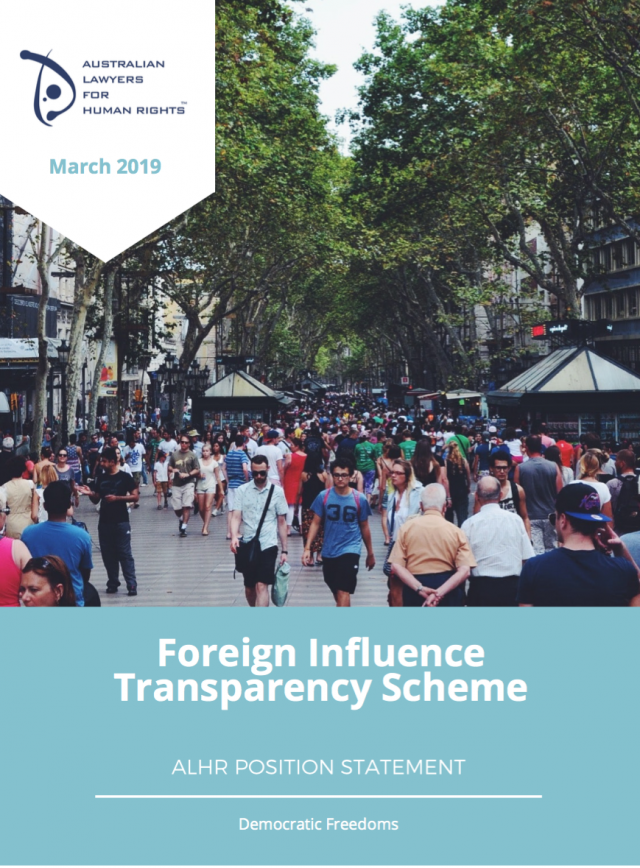 ALHR has published a position paper on the Federal Government’s Foreign Influence Transparency Scheme. ALHR is concerned that there are widespread misunderstandings about the nature of the legislation, in particular internal inconsistencies in the amended legislation as ultimately enacted, and in the fact sheets issued for the guidance of the public by Attorney-General’s Department.

In order to comply with Australia’s international human rights obligations and the constitutional right to freedom of political expression, it is submitted that the Act does not, and should not, require registration of communications which are aimed at informing or even changing the mind of the public, political parties, parliamentarians, or any part of the government.

It is ALHR’s view that communications on behalf of foreign principals should not be registerable unless the communication is aimed at inappropriately influencing a process – for example, by persuading the decision maker to:

which would be to inappropriately influence the proper process that the decision-maker should follow.

The connection with process as opposed to outcome is crucial to the appropriate focus and operation of the legislation, and, with all due respect, to its constitutionality. The Act should be interpreted in this light and the fact sheets relating to the scheme should be carefully amended as a matter of urgency to reflect the appropriate interpretation of the Act.