The course was an introduction to NGO lobbying of UN Special Procedures including UN Special Rapporteurs, Independent Experts and Working Groups of Independent Experts appointed by the Un Human Rights Council. The session was presented by the very energetic Bu who provided case studies in regards to successful lobbying regarding the Guiding Principles on Business and Human Rights and the move to draft a binding convention and also on his advocacy for West Papua. The discussions on West Papua were illuminating including in regards to a project we have planned in Brisbane next year challenging the UN Trust Territory status and hand-over of West Papua.

The next session was presented by Maria D’Onofrio, the General Secretary of Centre Catholique International Geneve, on the workings of UN Treaty Bodies from an INGO perspective and was also very informative.

I then headed off for a fascinating panel discussion at the Palais on the role of the International Criminal Court in addressing human rights violations. It was entitled “The Rome Statute, Accountability and the Protection of Human Rights” and the panel comprised of ICC President Judge Fernandez de Gurmendi, UN High Commissioner of Human Rights, Prince Zeid Ra’ad Al Hussein, Chairperson of the Committee against Torture, Claudio Grossman, Secretary General of Parliamentarians for Global Action, Dr David Cattin. Many country delegations attended including Australia (John Reid and John Quinn in attendance). In summary, the take away was that the efficacy of the court depended upon wider education in civil society and government of its role and purpose. 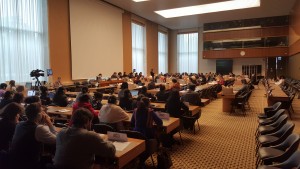 In the afternoon I sat in on the CEDAW Committee’s review of Timor Leste which was attended by many NGOs as observers and a number of UN Special Rapporteurs and was fascinating. I had a great dinner out at a traditional Swiss Restaurant with Tammy and Tamara from Amnesty International Australia and Curtin University Academic Fiona McGaughey who is currently completing her PhD on the UPR at UWA.

I began the morning blogging in my beautiful Air BnB upgrade on Eaux de Livre. I caught the bus to the HQ of Human Rights NGOs at Rue des Varembe 1, for a meeting with WILPF. I had met the very inspiring secretary general of WILPF, Madeline Rees earlier in the year (on who the movie The Whistleblower – starring Rachel Wiesz – is based) and we had discussed some international environmental law projects and I had been invited to continue the discussion.

I had an excellent, inspiring and engaging meeting with the WILPF Human Rights Coordinator, Maria Munoz Maraver, and other WILPF staff from the environment programme. For about 2 hours we discussed WILPF’s advocacy within the UNHRC and Working Group on the drafting of a binding convention on business & human rights. We also discussed many interesting ideas in terms of the environmental advocacy including obtaining their assistance on the very interesting illegal PNG logging matter I was just referred by the New York City Bar Association’s Vance Centre.

I then headed across town for some very exciting and productive private meetings with my Oxford and Synceritas colleague Jose Parra. My final meeting was at the villa in the grounds of the lovely Geneva Academy with Dr Helene Ramos dos Santos Senior Fellow at the International Bar Association’s Human Rights Institute (IBAHRI). I had met a former OHCHR consultant, Cynthia Gervais, at the Australian mission’s reception following the UPR who referred me to Helene discuss the engagement of lawyers in the UPR process and we had a very interesting discussion.

The next morning was spent trekking back up Mont Saleve (with photoshoot including thanks to local Anne Marie) before heading to the airport and finally home.

What a wonderfully spontaneous and insightful week!