Woken up at 4:30am by a phone call from Michael McKenna at The Australian but not in relation to the UPR in relation to our Burragubba judicial review case in Federal Court being heard on 23 – 24 November against the Adani Carmichael Coal Mine. Apparently I sounded like I had just woken up and he apologized and asked whether I was overseas. I clarified his concerns that our was still being heard, gave him instruction on how to access the Commonwealth Courts portal and made very clear again the case was being crowd-funded by the Wangan & Jagalingou people and not green vigilante litigious eco-terrorists, and yet he still published another misleading and hysterical article to the contrary (**sigh**) A mini-Murdoch will do as mamma-Murdoch does.

No time for sleep so spent the next few hours in my wee mezzanine perched atop the bibliotheque publique typing up my blog and reflecting on an amazing day. At about 9:30am I legged it over town, skirting the lake, to Claire Mahon’s place at the Global Human Rights Clinic were we engaged in some rip-roaring Ruddockian repartee’ and then taxi’ed over to the Australian UN Mission in perhaps the flashiest cab I have ever seen with the suave-est cab driver. 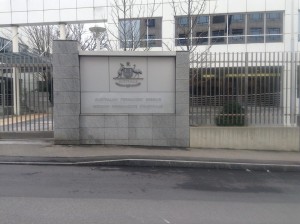 Apparently this was the first time since the UPR began in 2008 that any country mission had a roundtable with the NGO lobby the day following the Review and in Geneva – so that was at least a promising start. However, I must say the Ambassador’s and the Australian Delegation’s dismissive responses to some of the serious concerns raised made the process seem possibly disingenuous and wanting. The ISHR and Amnesty International both reported back that the feedback of various nation missions was that the tone of Australia’s presentations about our apparent “extraordinary care” of asylum seekers and the fact that “our ocean is bigger than yours (Mediterranean)” was taken as arrogant, patronising, defensive and inappropriate. The Ambassador basically dismissed such concerns with words to the effect “Well I don’t agree with that,  I think we did great!” – **sigh**! [This whole “Stop the Boats” bigot-ful bull-shittery seems to have created that cliche where a small lie turns into a bigger and bigger lie (until it swallows any last bit of integrity of the propagators) in order to save face and attempt to conceal the truth no matter how ridiculous it looks. It really is coming to the end of the era where politicians think they can distort facts and reality with confident words to the contrary. I think Bob Marley said it best “You can fool some people sometimes….”].

Les Malezer articulated excellently the concerns on implementation of the recommendations given that disappointingly only 10% of the recommendations last time had been fully implemented. Thus despite the Australian Missions and Delegations’ assurances the historical evidence is that Australia’s follow up from the UPR has been highly dysfunctional. The Amnesty representatives highlighted the gross increases in incarceration of indigenous youth (higher than since the 1992 Royal Commission into Aboriginal Deaths in Custody).

Once again the rhetorical rose-colored retrospectives of the “Phillip Ruddock Show” on the alleged gargantuan gains on indigenous rights needed to be reined in with reference to evidentiary facts and current statistics which the NGOs in attendance did very well.

Senator McEwan responded firstly saying that she had found it an interesting and engaging experience to be part of the Australian delegation even though she “didn’t liked being lectured to by other countries on our human rights record” (hmmm I really don’t understand this obstinate exceptionalism to international diplomacy and such lack of understanding – the whole raison detre of the UPR is that countries comment on a robustly interrogate each others human rights records). Senator McEwan then explained one reasons for the lack of adequate follow up are the “patchy” levels of knowledge/education of Australian parliamentarians about international law and international human rights law and typically there is always the old obstinate (my word) “incursions on our sovereignty” over-emotive bluster (also my word).

I later responded to this stating that it is unacceptable in 2015 in a globalised modern world that Australian politicians have limited understanding about international relations. There should be inductions for this so that they do understand otherwise there will be a level of unacceptable negligence in the system which is problematic for two main reasons – either the robust parliamentary ego which does not want to be seen to not know about such issues as international human rights laws and the machinations of treaty ratification etc will either (i) pretend they do know and be dismissive for want of not being found out that they actually don’t know or (ii) pretend they do know and then try to speak with authority on such topics which they don’t have basic knowledge. I think a lot could be achieved in a half day or one day course as an induction to parliament. As someone else mentioned, if you drive a sugar truck in Qld (or any labouring job for that matter) you are required to do annual inductions to confront employer OH&S and other liabilities and to ensure the job is done safely and efficiently. Surely, applying such analogy, for politicians and members of the executive performing such important work in representing the population of Australia both nationally and internationally the standard of care required is MUCH higher and thus all Parliamentarians should be doing such inductions including in international law/relations and this can be done discreetly such that the parliamentarian ego is safe. Otherwise, all of this UPR work we are doing is in vain and the whole efficacy and purpose of the work will be significantly compromised.

The training could also confront and properly discredit the absurd and hysterical “incursions on our sovereignty” abstraction flouted about by recalcitrant rights pariah’s who want any excuse as to why we should not comply with our international human rights obligations, conveniently forgetting that we live in a globalised world full of FTAs and TPPs and where Westphalian sovereignty is not absolute. FTAs and TPPs create hugely significant incursions upon sovereignty yet none of the neoliberal rabble arc up about this. It seems that the soft-sovereignty-mythology is always erroneously and mischievously (ab)used as a distraction when it comes to human rights.

Ultimately, greater respect for human rights is going to be much better for the economies of the world and the corporations (the subject of another article) even though such concept currently seems like a counter intuitive notion for the status quo of neoliberal laissez-faire capitalism. But if you consider how much consumer good faith has been lost with the finance sector since the GFC and now VW scandals and Exxon cover-ups – it’s going to take significant time for the market to recover genuine consumer confidence in corporations so the pressure is on!

In terms to doing things properly if you’re going to do them at all, I would make the same point about our shoddy, backseat-of-the-bus bogan diplomacy which was demonstrated by aspects of the Australian delegation during the UPR. How difficult is it to be courteous, non-patronising, non-arrogant and non-defensive? I mean, if you are going to bother doing international diplomacy you might as well do it properly, with respectful charm and savvy rather than be the rogue bogue on the global bus.

Met some great people after the NGO round table wound up. The issues raised will be further explored and followed up in early December in Sydney at another NGO UPR round-table being hosted by the Attorney-General’s department. I then shot off to the Palais for a very interesting panel on the International Criminal Court and IHRL starring ICC President, Judge Silvia Fernandez de Gurmendi, UN HCHR Prince Zeid and Chairperson of CAT, Claudio Grossman. However, I got the date wrong so I did a bit of work in the Serpentine Bar and rearranged plans to meet with my Oxford and Synceritas colleague Jose Parra.