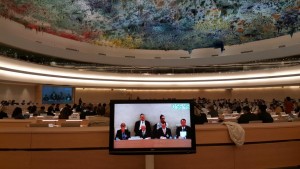 Finally, the moment had arrived, Australia at the “World Cup of Human Rights”. I entered the most courteous global Colosseum  and assumed my position back in the press gallery after taking another requisite selfie with Jose in the main chamber (someone on twitter comment that “it looks like a bunch of bridesmaids threw up on the ceiling!” – charming!). It turns out that I was not misplaced in the press gallery because (a) the very nice SMH European correspondent, Nick Miller, lent me his power adaptor when my computer was about to die and (b) I was “Twitter hands HOT!” (THH – #newacronymrightthereGenY) and tweeting like a bird on crack (the crack of dawn that is J – SWIDT – “see what I did there – an acronym for all the dishumourous dad’s out there). You can check my Twitter feed @Bennarama and I was also RT’ing the excellent work of NGO @UPRInfo who run a tight ship of tweets on each UPR. 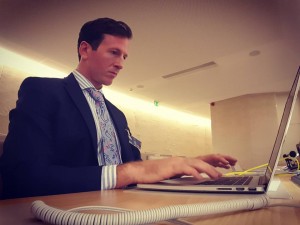 Trying to fit in with a very retro earpiece

The Australian delegation was assembled at the podium hearts pounding (well perhaps not!?). Panoply of countries paper russling and hussling for the refs whistle to blow. Interpreters glass boxed above minds focused, lip pursed nd ready for the plunge to …ahh…interpret! It was ON!

The Troika (3 countries drawn from a lottery conducting the review) were Japan, Germany and Namibia. 110 countries lined up on the speaker’s list, which is more than double the 53 countries that showed up to our first UPR in January 2011. There they had made 145 recommendations of which Australia accepted 90% but disappointingly 4 years hence has only fully implemented 10% of those. Due to amendments in the process and the maintenance of a tight ship of efficiency aboard the good ship UPR rather than each state who made it onto an exhaustive speakers list having 3 minutes to waffle on the time was proportionately divided amongst every state that wanted to speak (probably arguable whether a better development or not) and as such in Australia’s review each state had only 65 seconds. As the UPR is still in its infancy it remains to be seen whether states will become more time-and-strategy savvy in the third cycle and form-speaking blocs.

The Australian Ambassador and Permanent Member to the UN Mr John Quinn opened the session along with John Reid AO leading the Australian delegation.

Out of the stalls, came Egypt at the front of the field with concerns about migrant workers and the global realisation on the right to development. Right on its tails Estonia recommending Australia ratify the Optional Protocol to the Convention Against Torture (OPCAT – providing independent scrutiny to detention facilities – Australia promised to ratify 4 years ago at our first UPR); remove our reservations to the Convention on the Rights of the Child and work with Aboriginal & Torres Strait Islanders to properly implement the UN Declaration on the Rights of Indigenous Peoples (UNDRIP). Hot on their heels, Fiji came in throwing a curve ball on climate change and its intersectionality on human rights stating that Australia has not done enough to reduce Greenhouse Gas emissions and climate change which result in catastrophic human rights abuses for small island states. Fiji also chased up the field demanding immediate reform of asylum seeker processing and an end to grave abuses of asylum seeker rights by Australia. France then scrambled through from the back of the field with significant concerns about asylum seekers and violation of indigenous people’s rights. Germany brought a strategy of pointed specificity to the field requesting that Australia remove children and families and survivors of torture and trauma form offshore detention centres, close the detention centre and ensure the Migration Act I compliant with the preemptory invincible principle of non-refoulement. In fact the 4 “G” nations present (Germany Ghana Greece Guatemala) all strongly condemned Australia’s policy of mandatory offshore detention. Hungary recommends Australia expedite ratification of OPCAT. Indonesia & Iceland recommend federal Human Rights Act for Australia to implement intl obligations…and the list continued with the following topics continuously and consistently referred to with concern by the peer states (some of this was borrowed from the helpful summaries on UPR Info FaceBook Page):

It wasn’t all criticism and there was praise for the NDIS, combating human trafficking and numerous “Action Plans” for protecting the rights of Women, Children and Indigenous Peoples and there was also a push to ensure “Plans” become substantive change agents on the ground.

Australia was provided time to respond at three stages of the Review – at Mozambique, Tunisia and again at the conclusion. The process is meant to be dialogic and some, but not all states had submitted questions in advance. The Australian delegation certainly took a “Team Australia” approach and passed the ball around the field and off the podium to various bureaucrats from different Departments who responded to different issues: rights of Aboriginal and Torres Strait Islanders, rights of asylum seekers; the rights of women etc.

It was especially disheartening to see the disingenuous and patronising preemptive response to concern about Australia’s abuses of human rights of asylum seekers and assertions that Australia treats asylum seekers with “extraordinary care” which prompted the following tweets:

We then finished the day off with a reception by the Australian delegation at which Australian UN Ambassador John Quinn spoke and introduced Social Justice Commissioner Mick Gooda and the Hon Phillip Ruddock who both spoke well about their respective human rights areas and passions. 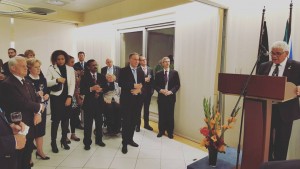 I entered the lift with Renee Arian (Human Rights Adviser to the Australian UN Mission), Steve McGlynn, the gentleman who had presented at the UPR on behalf of the Department of Immigration & Border Protection and Andrew Goledzinowski, ambassador for people smuggling issues, the gentleman who had made the extraordinarily misleading statements to the international community about the “extraordinary care” that Australia takes in looking after asylum seekers, an utterly untruthful assertion to the effect that “no asylum seeker has ever been returned to harm” as well as the cringingly obnoxious comments to the effect that “Europe you wouldn’t understand, our ocean is MUCH deeper, wider and broader than your Mediterranean”. Yes a ghastly combination gobsmacking diplomacy and delusional double speak (after what I witnessed today I’m starting to view Australia as the rough, rugged and rather feral bogan of the international community – I am going to write an article on this). As we entered the lift I commented that they must be glad its over and they must have done a huge amount of preparation and I asked how long they had been preparing. Mr “extraordinary care” responded with boastful words to the effect “Oh I didn’t do any, I wrote mine as the others were giving theirs” – shocked, in disbelief and utterly appalled. I think his comments to the international community have done untold damage to our international relations, diplomacy and standing in the international community.

I encourage everyone to keep your eye out for the final Report for Australia’s Second UPR to obtain a more detailed overview of the UPR than I have been able to provide here.