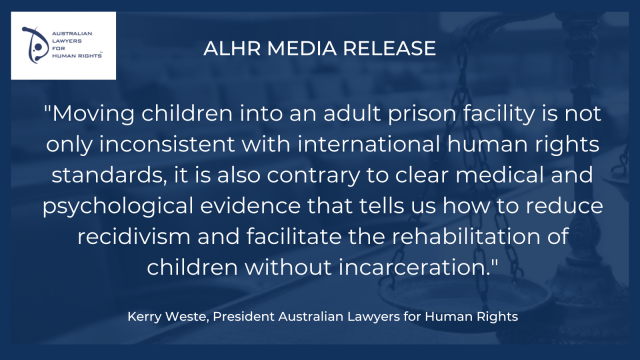 Australian Lawyers for Human Rights (ALHR) has condemned the West Australian Government’s decision to transfer 20 children and young people from Banksia Hill Detention Centre (BHDC) to the maximum security adult Casuarina Prison stating there are “no circumstances that justify the placement of children in adult prison facilities.”

ALHR President Kerry Weste said, “Moving children into an adult prison facility is not only inconsistent with the United Nations Convention on the Rights of the Child (CRC) and other international human rights standards, it is also contrary to clear medical and psychological evidence that tells us how to reduce recidivism and facilitate rehabilitation of children without incarceration. This is both a dangerous and self-defeating decision.”

ALHR has written to Premier McGowan urging his government to reverse the decision and to consider alternatives such as releasing children being held on remand and under the age of 14 years old to reduce pressure on the Banksia Hill Youth Detention Centre.

Ms Weste said, “Forging ahead with this transfer will make Western Australia a lone wolf in its abuse of children’s rights. It will be the only state in Australia moving children into the adult prison system. This is deeply disappointing given the last decade has seen the Queensland Parliament pass legislation to remove 17-year-olds from adult jails and the Victorian Government’s transfer of children to the Barwon adult maximum security prison declared unlawful under the Charter of Human Rights and Responsibilities Act 2006 (Vic).

Ms Weste said, “Promises or plans to detain children within adult prison facilities on the basis that they will be kept away from adult prisoners are not sufficient to ameliorate the reality that any placement of children in adult prisons is entirely inconsistent with human rights standards and the safety of children. Moreover, it is counterproductive to the aims of the criminal justice system to provide for rehabilitation and community safety.The research makes it very clear – children subjected to adult prison environments are exposed to drastically increased risks of irreversible harm which increases rates of recidivism.”

Ms Weste noted that the United Nations has previously criticised Australia for failing to respect the principle that children should be separated from the adult prison system. “In its most recent Concluding Observations to Australia in 2019, the UN Committee on the Rights of the Child expressed serious concern about children in detention not being separated from adults and urged Australia to ensure that, where detention is unavoidable, children are detained in separate facilities,” she said.

ALHR also emphasised that “despite the now thirty-one year old Royal Commission into Aboriginal Deaths in Custody recommendation that imprisonment only be used as a sanction of last resort, it will overwhelmingly be First Nations children who are disproportionately impacted by the WA Government’s decision.” During the year 2020-2021 Western Australia had the highest rate of Aboriginal Torres Strait Islander youth detention in Australia with First Nations children 24 times more likely to be imprisoned than non-Indigenous children. Ms Weste said, “These statistics drive home decades of profound failure to act in the best interests of First Nations children who find themselves in conflict with the law.”

“ALHR calls on the McGowan Government to reverse its decision to transfer this cohort of children and instead develop trauma-informed treatment and rehabilitation plans for them. We further call for urgent systemic law and policy reforms in Western Australia to implement an approach to youth justice that is consistent with international human rights law standards.”

“The WA Government, and indeed all jurisdictions in Australia, should raise the minimum age of criminal responsibility to an internationally accepted level of 14 years and release any children under 14 who are currently detained. The use of practices such as solitary confinement, isolation and mechanical restraints against children should be legally prohibited and governments should follow the evidence and invest in community justice reinvestment initiatives that address the root causes of offending.”

“Every child in Western Australia, including young offenders, deserves to have their human rights respected and protected in law. ALHR takes this opportunity to call on the McGowan Government to introduce a WA Human Rights Act to legally protect the basic human rights and freedoms of all West Australian children.”