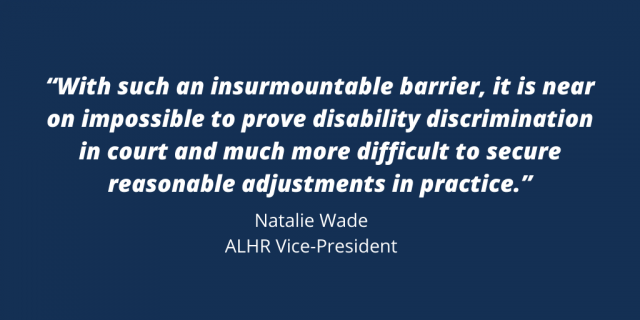 ALHR has joined with 46 organisations in an open letter led by  People With Disability Australia (PWDA) calling on the Commonwealth Attorney-General to rewrite Australia’s disability discrimination laws. ALHR Vice President and Chair of Disability Rights, Natalie Wade, is spokeswoman:

“A frustrated alliance of lawyers and community organisations has lobbied the Commonwealth Attorney-General to rewrite Australia’s disability discrimination laws after a court case made discrimination claims “near on impossible to prove.”

The alliance of 46 disability rights, community and legal organisations and 15 individuals has written to Attorney-General Michaelia Cash asking her to rewrite parts of the federal Disability Discrimination Act 1992.

The group, which includes People with Disability Australia (PWDA), has argued a four-year-old Federal Court case known as Sklavos[1] is undermining the protections people with disability are supposed to enjoy in federal anti-discrimination laws.

PWDA chief executive officer Sebastian Zagarella said the court’s interpretation of the Disability Discrimination Act in Sklavos v Australian College of Dermatologists had to be set right with legislative change.

“We are calling on Senator Cash and the Morrison Government to reconfirm the intentions of the Disability Discrimination Act and make it essential that organisations provide reasonable adjustments to people with disability,” Mr Zagarella said.

Reasonable adjustments can be changes made at work and schools, in accommodation, in enabling access to facilities, land and premises – or clubs and sports – and in the delivery of goods and services.

One in six people with disability have also experienced discrimination in
education settings.

“Thanks to the Sklavos case, people with disability face the heavy burden of proving there’s a causal connection between their disability and the organisation’s failure to provide reasonable accommodations,” Adelaide-based legal practitioner Ms Wade said.

“With such an insurmountable barrier, it is near on impossible to prove disability discrimination in court and much more difficult to secure reasonable adjustments in practice.”

The Act’s reasonable adjustment provisions were designed to provide substantive equality for people with disability in a range of settings, by ensuring changes to structures, systems and practices to accommodate disability.

People with disability need discrimination laws to support us in all areas of life, including employment, education, health, transport, accommodation, recreation and culture.

Discrimination can lead to people with disability avoiding everyday activities and increases the odds of people experiencing psychological distress.

You can read the alliance’s letter and the recommended amendments as a PDF.”