Budget: The good and the bad for refugees 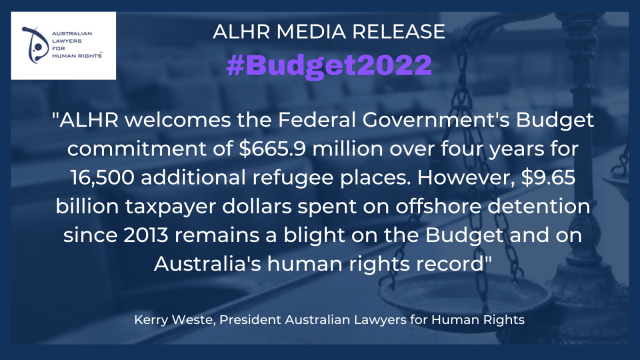 Australian Lawyers for Human Rights (ALHR) has welcomed additional refugee places announced in the Federal Budget. However, we are concerned by continued costs blow-outs on Australia’s inhumane offshore detention system, as well as cuts that impact Australia’s commitment to establish proper oversight and scrutiny of detention facilities and the cruel exclusion of people on temporary protection visas from the ‘Cost of Living Payment’.

ALHR said, “We welcome Budget spending on refugee-related programs, particularly the commitment of $665.9 million over four years for 16,500 additional refugee places. The 4,125 additional places a year over four years for refugees from Afghanistan will supplement the 13,750 places per year already in the Refugee and Humanitarian Program lifting the combined annual total to 17,875 places. ALHR notes that the measures go some way toward addressing the ongoing human cost of the current Government’s 2020 Budget cuts to the program which removed 5,000 places per annum, however, still fall nearly 1,000 places short of a return to the programs pre-2020 budget 18,750 places. As the Refugee Council of Australia noted, the COVID-19 pandemic has seen approximately 13,382 refugee visas not issued over the last two financial years and these lost places have also not been rolled over. “

“Offshore processing remains a blight on Australia’s human rights record and a blight on our federal budget. Spending on the Government’s offshore processing policy has blown out in 2021-22 by $146 million, the seventh cost blowout in eight years. The allocation of $482.5 million in 2022-23 will take the cumulative cost of this policy since July 2013 to $9.65 billion. ALHR views this spending as spending on the continued violation of Australia’s international human rights law obligations. A Government that respects the international rules based legal order would not continue spending such vast sums of taxpayers money on a system that the United Nations has repeatedly called out as leading to arbitrary detention, cruel, inhuman degrading treatment or punishment and tortue.”

“Further, the Budget has cut funding to the Commonwealth Ombudsman’s office by nearly $6 million leaving ALHR concerned that it will not have sufficient resources to realise its role as a National Preventative Mechanism under Australia’s commitment to implement the United Nations Optional Protocol Against Torture (OPCAT). Independent oversight and scrutiny is essential to ensuring refugees and asylum seekers, as well as visa holders subjected to Australia’s harmful ‘character test” laws, do not continue to be subjected to detention conditions that violate Australia’s obligations under the UN Torture Convention.”

ALHR also expressed its concern regarding the exclusion of people seeking asylum and those on temporary protection visas from the Government’s ‘Cost of Living’ payment. Ms Caldwell said, “This measure is designed to further punish those who arrived in Australia by boat and to discourage people from seeking asylum in Australia. Continuing to deny people a safety net demonstrates the Government’s continued lack of appreciation for its human rights obligations.”