Budget: No vision for a modern democracy that values human rights 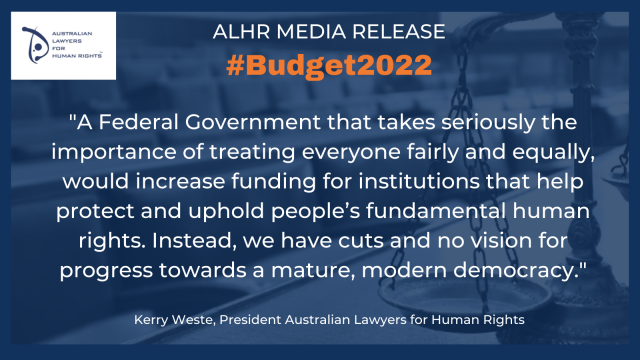 Australian Lawyers for Human Rights (ALHR) has described the 2022-2023 Federal Budget as reflecting a Federal Government that does not have a vision of Australia as a modern democracy that values human rights.

ALHR President Kerry Weste said, “ALHR is alarmed that the budget reflects a clear disregard for Australia’s need to develop improved national human rights frameworks. We condemn cuts to the Australian Human Rights Commission that will see its budget reduced by over one third over the next four years, from $32.6 million in 2021–2022 to $20 million in 2025–2026.”

Ms Weste explained, “National human rights institutions play a crucial role in promoting and monitoring the effective implementation of international human rights standards at the national level, particularly in a country such as Australia with the unenviable status as the only developed Western Democracy without a federal Human Rights Act or Bill of Rights.”

Ms Weste said, “This is highly concerning given the Federal Government has designated the Commonwealth Ombudsman as the National Preventative Mechanism under its 2017 commitment to implement the United Nations Optional Protocol to the Convention against Torture (OPCAT). These cuts bring into question how seriously the current Government is taking its international commitment to embed a coordinated and independent inspection system for all places of detention in Australia. If we are to live up to this commitment and ensure that people in prison, juvenile detention, immigration detention, quarantine and other detention facilities are not subject to torture or degrading treatment or punishment then additional funding and an overarching national framework for OPCAT implementation is required. Instead this budget cuts the resources available to achieve this.”

“A Federal Government that takes people’s basic rights and freedoms seriously, and recognises the importance of treating everyone fairly and equally, would increase funding for institutions that help protect and uphold people’s fundamental human rights. It would also include funding within the budget for the introduction of a Federal Human Rights Act. It’s long past time to finally bring Australia into line with like democracies and ensure everyone in our community enjoys the same protections as people in comparable countries across the world.”

“Sadly, this budget does nothing to progress a human rights culture in Australia.”