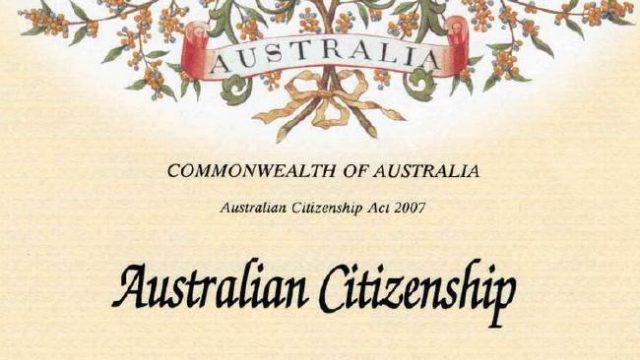 The Australian Government is seeking to make substantial changes to the requirements for the acquisition of Australian citizenship by conferral. The government has suggested that proposed changes in the Bill are necessary to ensure national security and to strengthen the integrity of the citizenship programme. The Bill has been referred to the Senate Legal and Constitutional Affairs Committee for inquiry. The Committee is due to report on 4 September. Over 500 submissions have been made to the inquiry which reflects considerable concern about the impact of the proposed changes.

In ALHR’s view no case has been made out for these proposed changes. We are concerned that, if passed, these changes would be divisive and serve to further alienate some of the most marginalised members of the community. They would also give the Minister for Immigration and Border Protection almost unrestrained power to act as a gatekeeper to formal membership of the Australian community, contrary to the rule of law.

While we agree that Australian citizenship is a privilege, in a successful and cohesive multicultural society such as ours, citizenship policies should be framed as providing a pathway for inclusion into our society, and not as a tool for exclusion. The human rights of prospective citizens — whether they are asylum seekers, refugees or migrants — should be carefully balanced against proposals that seeks to tighten access to Australian citizenship. While there are many problematic aspects to the Bill, we highlight below the areas that are of particular concern to us.

The Bill proposes that a person cannot make a valid application for citizenship unless it is accompanied by evidence of ‘competent English’. The government has consistently stated that this will require an applicant to obtain a band score of 6 in an International English Language Testing System (IELTS).

This proposed change will render access to citizenship impossible for many refugees and humanitarian entrants. Current assistance given to refugees and humanitarian entrants through the Australian Migration English Program (AMEP) only prepares them up to a level of functional (a significantly lower level than competent) English. By contrast, an IELTS score of 6 is at a level required for undergraduate and postgraduate entry at many Australian universities.

We note that Australia has been enriched over many years by many citizens whom would not be able to obtain an IELTS 6. When we compare the English requirements in other countries similar to ours —such as Canada or New Zealand — their requirements are on par with what we currently have: that an applicant demonstrate ‘basic’ understanding of English that allows them to participate as members of the community. No case has been made for why a higher level of English is required.

We agree with the proposition that prospective citizens should be encouraged to learn English. If the Australian government is serious about improving the English of prospective citizens, it should further invest in language education programs for migrants to assist them in obtaining the requisite level of English. This is a preferable and inclusive approach, rather than setting a bar so high so as to exclude applicants.

Again, no case has been made out for why these changes are necessary. If passed, the changes could result in migrants living in Australia for up to a decade — a number of years on a temporary visa before transitioning to permanent residency — before being eligible to apply for Australian citizenship. It would create an underclass of persons living in our community, paying taxes and contributing to society, but without the benefits and protection of Australian citizenship. We fail to see how this promotes a cohesive and unified society.

The effect of this change will disproportionately affect refugees and humanitarian migrants. For these people, citizenship and a sense of belonging is crucial because for many, their refugee status arises precisely because they can no longer rely on the connection and protection of their home country. Further, citizenship is often necessary for refugees to be able to sponsor their families to Australia, and to be able to travel freely to and from Australia.

We have also stated elsewhere that these changes may also impact on migrant women escaping from family violence, many of whom may not able to access welfare payments and crisis accommodation because they are not Australian citizens.

The Bill also proposes that an applicant for Australian citizenship must demonstrate their integration into Australian society and demonstrate an adherence to Australian values. It is for the Minister for Immigration to decide exactly what these criteria mean and how they are to be met. We are concerned that the government has not released any of the submissions to its discussion paper, which was aimed at allowing Australians to discuss the content of these ‘Australian values’.

To the extent that ‘integration’ and adherence to ‘Australian values’ are themselves value judgements to be made across thousands of citizenship applications, we suggest that it would risk inconsistent and unprincipled decision-making leading to judicial and merits review. We are concerned that, in practice, these changes would result in arbitrary outcomes that create less, and not more, social cohesion within Australian society.

Giving the Minister such unstrained and unchecked powers is an affront to the rule of law in Australia. In such important matters as citizenship, it is crucial that applicants have the ability to access merits and judicial review of decisions. We note that judicial review of any decision of the Minister is unlikely to succeed, because the courts have ruled that what is in the ‘public interest’ is a matter for the Minister of the day to decide.

In our view, these proposed changes to Citizenship laws are unnecessary, dangerous and have the potential to impact on the rights of asylum seekers, refugees and other migrants.

We have called on the cross bench to vote against the legislation and have offered to brief senators on any aspect of this legislation.