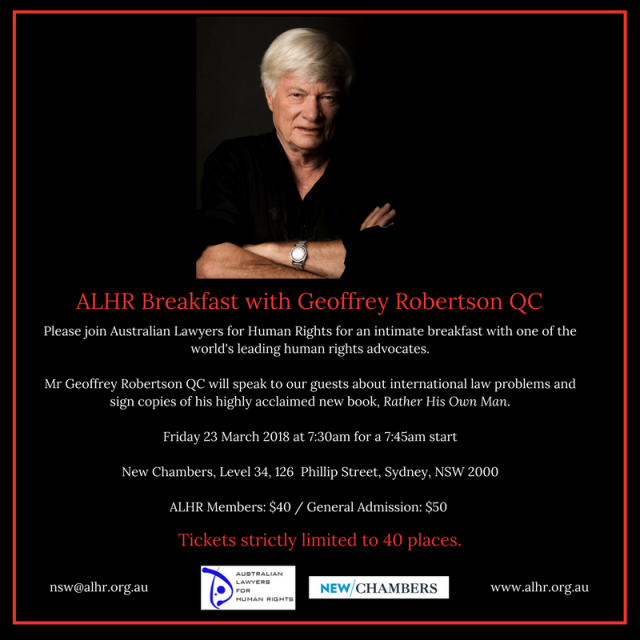 Please join Australian Lawyers for Human Rights for an intimate breakfast with one of the world’s leading human rights advocates.

Mr Geoffrey Robertson QC will speak to our guests about international law problems and sign copies of his highly acclaimed new book, Rather His Own Man.

Born and educated in Sydney, and then at Oxford as a Rhodes Scholar, Mr Robertson has had a distinguished career at the English bar, as a Queen’s Counsel and as founder and head of Doughty Street Chambers, Europe’s largest human rights practice. He has appeared in many celebrated cases, prosecuting Hastings Banda and General Pinochet and defending Salman Rushdie and Julian Assange.

He served as first President of the Special War Crimes Court in Sierra Leone and in 2008 was appointed by Ban Ki-moon as a ‘distinguished jurist’ member of the UN’s Internal Justice Council. In 2011 he was awarded the New York Bar Association’s prize for achievement in international law and affairs. Mr Robertson is a Master of the Middle Temple and visiting professor in Human Rights Law at the New College of Humanities. His books include The Tyrannicide Brief, which led to a re-evaluation of English civil war history; Does Dracula Have Aids?; Mullahs Without Mercy: Human Rights and Nuclear Weapons; The Case of the Pope; an acclaimed memoir (The Justice Game); the influential text Crimes Against Humanity – the Struggle for Global Justice; and Dreaming Too Loud. Mr Robertson lives in London. He returns to Australia regularly to visit family and conduct his trademark Hypothetical.

ABOUT ‘RATHER HIS OWN MAN‘

“If Robin Hood, King Arthur, St George, Florence Nightingale and Oscar Wilde were compressed into one witty, brilliant and compassionate lawyer they still wouldn’t come close to approximating that heroic champion of our laws and liberties that is the great Geoffrey Robertson. What a life and how crackingly well told. When a heart-stoppingly unputdownable comedy thriller turns out to be a truthful account of a real life, you know you’re onto a winner.” Stephen Fry.

In Rather His Own Man Geoffrey Robertson gives an account of his unique and astonishing life, from pimply state schoolboy in suburban Sydney to Queen’s Counsel at the Old Bailey and beyond, after founding what is now the world’s largest human rights practice. 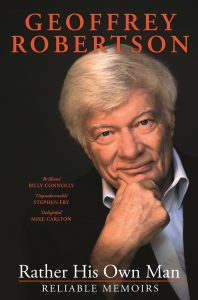