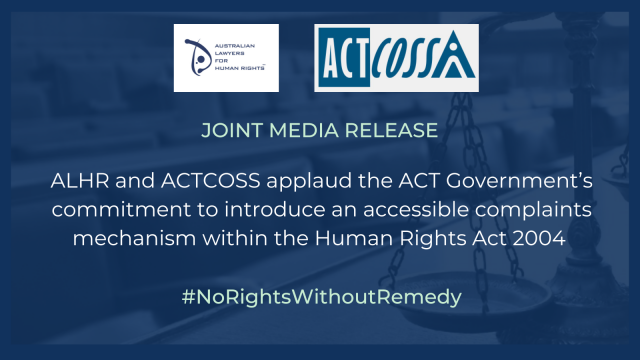 Human rights lawyers and social advocates have applauded the ACT Government’s commitment to immediately commence the process of legislating for an accessible complaints mechanism within the Human Rights Act 2004, giving Canberrans, whose human rights are breached, the ability to bring a complaint to the ACT Human Rights Commission for confidential conciliation.

ALHR President Kerry Weste said, “These reforms will make it far simpler and easier for all Canberrans to protect their human rights and will enable the ACT to meaningfully hold all behaviours up to the standards set out in the Human Rights Act.”

Currently, complaints about human rights breaches must be taken to the Supreme Court, a process which Ms Weste describes as “prohibitively expensive, complex and inaccessible to most Canberrans, especially those experiencing disadvantage. Unfortunately this has left people whose rights have been breached without access to effective remedies.”

“These reforms will deliver an easier, cheaper and simpler pathway for everyone to access remedies by making a complaint to the ACT Human Rights Commission where conciliation can offer meaningful solutions that make a real difference in people’s everyday lives.”

The ‘No Rights Without Remedy’ petition also called for amendments to enable the transfer of complaints to the ACT Civil and Administrative Tribunal (ACAT) for resolution, where conciliation at the Human Rights Commission is unsuccessful. However, the ACT Government has only agreed ‘in principle’ to introducing this aspect of the amendments citing the need to consider the complexities of such a proposal and resourcing implications. Minister Cheyne indicated there will be consideration of this option once the conciliation mechanism has been in place for a period of time.

Ms Weste concluded, “We applaud the announcement of these reforms as a key step in ensuring the Human Rights Act can realise its true potential to protect and promote human rights for everyone in the ACT.”

“With campaigns underway calling for Human Rights Acts in New South Wales and Western Australia, as well as at the federal level, these measures will also provide leadership to other jurisdictions as they consider the clear need for and benefits of introducing human rights legislation that protects every Australian’s right to lead a life of dignity, equality and freedom.”

Acting CEO of ACT Council of Social Service Dr Gemma Killen said, “We are pleased to see the ACT Government commit to addressing the serious gaps in our human rights system and deliver an accessible human rights complaints mechanism here in Canberra.”

“Those community members who are most vulnerable to human rights breaches have also historically been those least likely and able to access remedies and accountability mechanisms through the Supreme Court. We look forward to seeing human rights legally enforced here in the ACT and commend the ACT Government for ensuring that all people will have the right to live safely, freely and with dignity,” Dr Killen concluded.