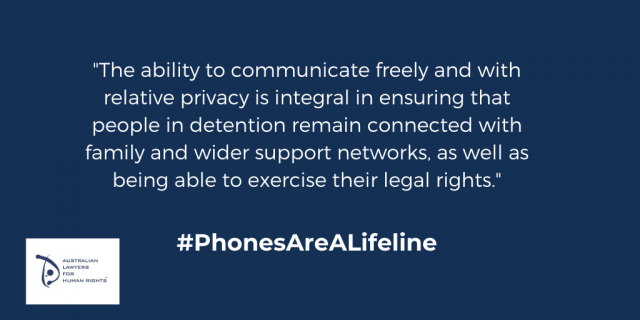 Australian Lawyers for Human Rights (ALHR) has written urging the Senate to oppose the Migration Amendment (Prohibiting Items in Immigration Detention Facilities) Bill 2020. ALHR President Kerry Weste said, “The Bill seeks to expand both the Minister’s powers to determine items to be ‘prohibited’ and authorised officers’ screening, search and seizure powers, in a way that is excessive, disproportionate and without sufficient justification.”

These measures would confer on the Department of Home Affairs and its contractors powers which exceed the powers held by the police as part of their duty to protect the Australian community. Yet, the Bill does not provide any proper accountability mechanisms, such as requiring any threshold of establishing a well-founded suspicion of wrong-doing, Further, it is not clear why such expansive search and seizure powers need be conferred on unspecified ‘assistants’ to Departmental officers and what training these assistants would undergo prior to receiving such powers.

In failing to specify that a well-founded suspicion of wrongdoing must be present in order to confiscate or ban personal devices, the proposed Bill represents an unacceptable attempt to criminalise people in immigration detention. ALHR notes that immigration detention is an administrative, rather than a punitive, measure. People are detained when they do not have a visa. It does not necessarily follow that they have a criminal history. Indeed, according to the most recently published Immigration Detention and Community Statistics Summary, less than half of the people in detention had their visa cancelled on ‘character’ grounds. Moreover, any people who are in detention due to visa cancellations on character grounds and who may have a criminal history, will have already been through the criminal law system, where judicial discretion has been exercised in considering the material facts of an offence and imposing a sentence which the person has already served by the time they reach immigration detention. But for their immigration status, the people who are in detention due to visa cancellation on character grounds would be living in the community and would not be subject to similar proposed restrictions of items they may have in their possession, or such enhanced screening, search and seizure powers.

ALHR considers the scope of the Bill is unacceptably vague and we are very concerned at the potential for its use in a way that will support severe and disproportionate restrictions of the rights of immigration detainees and the arbitrary seizure of items without adequate scrutiny or oversight.

In particular, a ban on mobile phones and similar devices will exacerbate an already alarming lack of transparency in Australia’s immigration detention practice at a time when Australia is ostensibly working towards the implementation of the Optional Protocol to the Convention Against Torture and Other Cruel, Inhuman or Degrading Treatment or Punishment (OPCAT) and the transparency of processes relating to places where people are detained, including immigration detention. Without mobile phones, the ability of immigration detainees to contribute to public debate surrounding their treatment, as well as report human rights abuses will be unacceptably curtailed.

Mobile phones and other communication devices are also essential to the mental wellbeing of immigration detainees and the proposed Bill will have adverse psychological effects on people in detention. Mobile phones are one of the very few links detainees have to the outside world and the Bill does not provide for any substitute or replacement for this vital link.

The ability to communicate freely and with relative privacy is integral in ensuring that people in detention remain connected with family and wider support networks, as well as being able to exercise their legal rights. In response to the isolation of immigration detention, immigration detainees rely heavily on their family, friends and wider support networks both in Australia and overseas, as well as their counsellors and legal caseworkers.  Mobile phones provide these necessary means of connection. The COVID-19 pandemic has demonstrated how Australians in the broader community rely upon mobile phones and other internet capable devices to cope with physical isolation. For people in detention, mobile phones and other internet capable devices represent an essential way of coping with mental health issues by remaining connected to supports outside of immigration detention.

The proposed Bill is an unnecessary, unreasonable and disproportionate attempt by the Australia Government to subject people in immigration detention to human rights violations by extending the punitive powers of immigration officials. ALHR is of the view that the Bill cannot be sufficiently amended to rectify these issues. There were over 100 submissions to the Senate inquiry in relation to this Bill. All, with the exception of Serco and the Department of Home Affairs, opposed the Bill.

ALHR urges the Senate to oppose the Bill in its entirety and ensure that people under Australia’s control are subject to transparent detention processes in line with Australia’s international human rights obligations.”